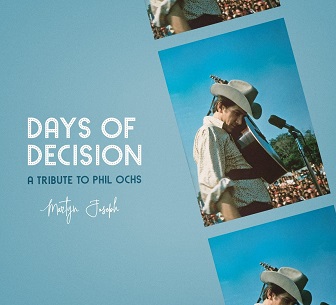 
A review while opening for Clannad in Boston on their 1993 and a comparison to Ochs led to Martyn Joseph seeking out his music. Meeting Phil's sister in 2013 planted the idea of recording an album of his songs.

Martyn Joseph's distinctive voice does the cracked burr and passionate roar on "I Aint Marching Anymore" with a touch of Dick Gaughan's bite. His version of "When I'm Gone" has that mix of resignation and pride that Gaughan's version of the Ochs anthem on his CALL IT FREEDOM has. Martyn's guitar is spot on too, energetic, percussive with some thump and power, underlying the bite of the lyric on "I'm Gonna Say It Now" and the musicality of "Flower Lady". Is it heretical to say that Martyn's deeper brooding vocal and guitar brings a darker edge to the performance so it matches the terrifying lyric. Joseph captures the reflective side to Ochs songs perfectly on tracks like "Days Of Decision" with his guitar soft and understated to bring the voice to the fore. Stripped of that strident period guitar songs like "Days Of Decision" and "The Ballard Of William Worthy" sound strangely current not like ancient protest song history. Same crap, different decade possibly, but Joseph's arrangements and performance makes them accessible.

"That Was The President" and "Lou Marsh" were sad and emotional in 1965 and Joseph's readings are full of pathos and power, maybe more now that history has rolled on. The little touches of piano and percussion are spot on and Martyn inhabits perfectly versions of songs he clearly knows inside out and back to front, his delivery assured and muscular. Fifty years on songs like "There But For Fortune" show the debt later performers and writers owe to Ochs and in Josephs hands sound as sharp and relevant today as they did then. Recorded at his own studios, this is an album of quiet storm nuanced performances, "Cannons Of Christianity" with its subtle stroked guitar and solemn piano chords is a prime example of the meditative power and authority Joseph builds on each song.

Martyn says he made a conscious, decision to dial back the guitar so that complex arrangements dud not distract from Ochs words. While the words and Joseph's voice are to the fore, there is a grace and considerable beauty to his playing and double tracked vocal on "Changes". Joseph confessed to feeling a particular connection to the troubadour's road love song "Song Of My Returning", written in Wales. The sense of separation and disconnection while fuelled by love, comes through in the lyric and Martyn's delivery.

Martyn Joseph quietly releases perfectly crafted albums of poignant songs written and performed from the heart. This album sees him using his considerable voice and guitar to present songs he clearly knows well. Anything that gets more people listening to the wonderfully observed songs of Ochs and delving back into Josephs catalogue is a good thing. Sonny, Phil's sister, blesses the results and the way Martyn focuses on the song and lets the lyrics breathe. Thirty five years gone and Ochs songs are as sharp and rich as ever on this superb collection. I like to think Phil might have appreciated the sense of injustice and outrage of songs like "Here Comes The Young" and returned the favour.