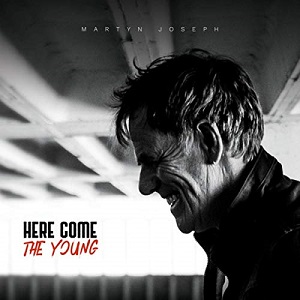 
When you have a plethora of albums beneath your belt, a host of awards including life time achievements, the temptation to sit back and milk your reputation with greatest hit compilations and best of tours must be high. It's a tried and tested route that has seen many an artist deep into the dusk of their career. That is not the way of Martyn Joseph, his approach is to go out and record one of the best albums to date.

"Here Come The Young" kicks off with a title track that highlights the betrayal of previous generations onto the current and the apocryphal path that that is leading us down. How long will people continue to allow themselves to be held down by laws that they have had no say in crafting as we continue to cheat them out of their inheritance by not only destroying it, but also passing on the bill.

That Joseph is a seasoned campaigner and activist, but what this album also brings out is that he is also a father and a family man. A man that has the simple task of taking his children to uni, a journey that he explores from many angles.

The Welsh Springsteen is a term that has been applied to Martyn Joseph and whilst there is a level of flattery in the description, the songs, the performances, it belies that Joseph is very much his own man, a man with that rare talent to turn a complex issue into a three and a half minute narrative that makes more sense than any politician that you can name.

"Here Come The Young" is a powerful album, not just in what it says, but in how it says it. Unrestrained anger is at best counterproductive, anger works best when it's focused, when it's controlled that's when it really grabs the attention. Mix that with hope and compassion and you have a really heady brew.

This is a masterclass on songwriting and studio craft. It's an album that cries out to be heard live, but loses nothing in coming at you via a recorded medium because you can feel the passion. "Here Come The Young" is quite simply epic and that's not a word that should be used simply because someone brought back crisps from the bar.

Martyn Joseph is still sharp, words his rapier, guitar his shield, this is an old warrior that know knows how to fight hard in the field and put his name to a cause, be it family or society.