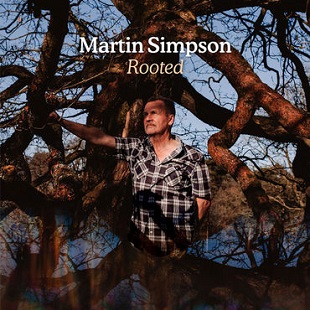 
One of the living legends in British folk music and acclaimed as one of its guitar masters, not to mention being a virtuoso on banjo too, this is Simpson's 21st studio album, the songs on which he says "embrace nature and travel, mental health, real life stories, loss, politics and history."

He's joined by some of the folk world's great and good, with Nancy Kerr on fiddle, Andy Cutton on melodeon and accordion, cellist Liz Hanks, John Smith on electric guitar, bassist Ben Nicholls and backing vocalists that include Julie Matthews, Chris While, Amy Smith, Max Simpson and Richard Hawley.

There's four originals,six traditionals and three covers, kicking off illustrating his nimble fingerpicking with the self-penned 'Trouble Brought Me Here', a track which reminds that he's as much steeped in the American folk and blues tradition as he is the English.

The first of the traditional numbers arrives with the folk blues 'Kimbie', learned as a lad from a music shop owner in Scunthorpe and played on the same Martin D-28 acoustic on which Jackson C. Frank wrote and recorded 'Blues Run the Game' and who, by the bye, also arranged and recorded this on his 1965 debut.

Turning to banjo, 'Born Human' was written by the conservationist David L Grimes, a fishing boat captain based in Alaska, in response to the environmental damage caused by the likes of the Exxon Valdez oil spill in 1989. Another real life character is the basis of 'Ken Small', which, featuring cello, is Simpson's account of the Devonian who salvaged a Sherman Duplex Drive tank from Start Bay in Devon and wrote the book The Forgotten Dead about Operation Tiger, a 1944 D-Day rehearsal in which 1000 American servicemen were killed off the Devon coast when the convoy was attacked by U-boats, the disaster hushed up for a long period.

The second cover also has a war connection, Shel Silverstein's stark and spare trad-styled 'Hills Of Shiloh' telling of a woman whom 40 years on, is still tormented by the death of her partner during the American Civil War, a number that featured in live performances with June Tabor from 1977-1988 of songs from or inspired by the war.

The third original, another sprightly fingerpicked folk blues, 'Henry Gray', again revolves around a real life character, one of the first call piano players in the Chicago blues scene who recorded with Little Walter and also played with Howlin' Wolf and Elmore James and with whose Memphis band, Henry Gray and the Cats, Simpson regularly played for a decade.

Returning to traditional material, Simpson first heard 'Who's Going To Shoe Your Pretty Little Foot?' by Woody Guthrie, a derivation from the British ballad lament, 'The Lass Of Loch Royal', originally played by Simpson as an instrumental until he subsequently added the lyrics about illusion, greed and hate, the version her coloured by Kerr's subtle fiddle work.

First heard on an unreleased Hedy West recording, 'Queen Jane' is another traditional arrangement (a version of 'The King's Daughter Lady Jean') that opens with drone and ruminative acoustic guitar before gathering tempo around West's banjo arrangement. West is also the source of the American folk traditional 'Joe Bowers', as featured on her 1966 album, 'Pretty Saro', the true story of a Missouri gold miner who went to California leaving his sweetheart Sally behind only to get a letter saying she'd married someone else. It's followed by the final Simpson original, 'Fool Me Once', a terrific new, fiddle-backed rewritten version of a dusty, reflective song that first appeared on 1999's 'Bootleg USA'.

The next two tracks are both traditional tunes with new words by Simpson, the first being the nature-themed, simply accompanied 'Kingfisher' set to the tune of 'The Fair Flower Of Northumberland', the second, the skittering 'Neo' ('Neo-Liberal Billionaire') featuring Don Flemons on bones and Alan Barnes on clarinet, a contemporary political satire rework of 'Ragtime Millionaire'.

Again striking a political note and with Hanks on cello and Kerr on fiddle, the album closes with another cover, Robb Johnson's 'More Than Enough', a song that regulary featured in the repertoire of Simpson's late father-in-law, Roy Bailey to whom the album is dedicated and which has a particularly poignant mention in the sleeve notes about him rousing to sing along on his death bed.

The release also comes with a bonus disc, 'Seeded', a collection of seven instrumentals, three originals (among them 'Waenglapiau', named for the Welsh farm where the Baileys summered and 'Arbutus Turnaround' inspired by a mention of the tree in Joni Mitchell's blues turnaround song 'For The Roses'), three traditionals, including 'Queen Jane' and 'Who's Going To Shoe…', and Blind Willie McTell's 'Mama, It Ain't Long.

It is, of course, taken as a given that any Simpson album is going to be a consummate piece of work, but this surely has to rank among his very best.