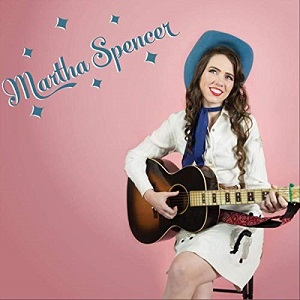 
Appalachian songwriter Martha grew up in the Blue Ridge Mountains region of Virginia, surrounded by her music-playing family (her parents are Emily and Thornton Spencer of the famous, long-standing Whitetop Mountain Band). In which context, then, the opening track of her self-titled, self-released debut album, Blue Ridge Mountain Lullaby, will be almost exactly what you might expect - a self-penned, though entirely classic-sounding song evoking memories of her father playing the fiddle to send her to sleep; as authentic as it is beautifully delivered, with an assured (again classic-sounding) country backdrop. The very next cut, My Heart Says Yes, is another totally classic-sounding composition by Martha herself, this time dealing with another of the standard country tropes - yep, you guessed it, lurve! OK, I promise not to use the phrase "classic-sounding" again in this review, even tho' it applies 200% to virtually every track…

The Last Leaves is a melancholy masterpiece cut from the same cloth as Dolly Parton, whose singing Martha's at times even recalls; Let The Wild Stay Free could be a long-lost Carter Family number, and it's even arranged just like one! And best of all, I reckon, is the gospel-flavoured Tree Of Heaven, a kind of cross between Iris DeMent and the Carters. In all, the album contains seven of Martha's own compositions, and all but two of these are clustered in the first half of the disc, demonstrating her absolute mastery of a host of musical (and writing) styles.

The album moves on real fast, taking a veritable whistle-stop tour thru the various musics Martha loves and grew up with. Along the way there's some stonking excursions into tough-nosed R'n'R (Hard Headed Woman), piano-led rockabilly (No Help Wanted) and blues (Chickens Coming Home To Roost), but still Martha keeps on comin' back to true mountain music. Her singing voice is remarkably strong, sparky and confident, with matching qualities of tenderness and passion and even a slightly abrasive edge when called for. Her account of Hazel Dickens' Rambling Woman is nigh peerless too, by the way.

In essence, Martha's just like an old-fashioned true country star with a crack backing band; she's real fortunate to have secured the talents of a number of high-calibre musicians including Frank Rische, Billy Hurt Jr., Brennen Ernst and Alex Leach, who dovetail with Martha's own playing (banjo, rhythm and lead guitar and bass). As an added treat, her mother and late father also appear, along with other Whitetop Mountain Band members, on (sadly only) one track - Ruby, a song penned by Cousin Emmy, which features some stunning vocal gymnastics (high yelps and long-held notes) as well as some brilliant playing (shame about the fadeout tho'). The final track, Ramblin' Hobo, is a 1½-minute virtuoso banjo instrumental played as to the manner born, taking inspiration straight from that good ol' mountain stream.

Martha's impressive debut is almost certainly a contender for Country Album Of The Year in my book.