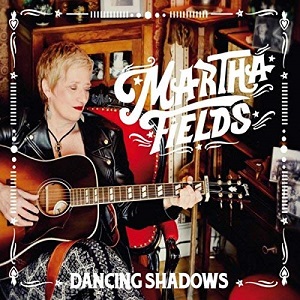 
Two years on from her outstanding Southern White Lies and written in southwest France where she's now based, Fields returns with an album that, backed by her live French band, Serge Samyn (bass), Urbain Lambert (electric guitar), Olivier Leclerc (violin), Denis Bielsa (drums) and Manu Bertrand (guitars, mandolin, banjo, lap/pedal steel), takes a journey through the landscapes of both the American south and her own past and present.

It takes to the road with the swampy blues groove of the Southern Gothic 'Sukey', a song nodding to her Cherokee ancestor who single-handedly raised seven kids in cave under the family burial grounds, Fields' gutsy, twang-infused vocals making their presence felt from the get go.

Strong female characters manifest elsewhere, heading into the mountains for the mandolin-led, rhythmically scampering 'Demona' conjuring a wilder spirit, Maxine a banjo-backed hoe-down stomp urging a put upon girl breaking free and, riding a slow burn fuse, 'Forbidden Fruit' a defiant assertion of strong female spirit as she contemptuously sings "you want to rescue me? Well, go rescue yourself!.... I like myself" while Bielsa lays down complementary electric fire on top of the almost tribal rhythm. Likewise on the mid-tempo country soul 'Desert Flower' she sings of a woman who, "no borders around her heart, no borders round her mind", "blooms under harsh conditions… her words are her munitions."

As with most exiles, there's almost inevitably a romantic nostalgia for the land left behind. A country barroom beer and sawdust sound enfolds the steel-coloured acoustic reflective 'Paris To Austin' ("I'll pretend that the Seine is the Colorado and the Eiffel Tower is a big oil well"), that same homesickness extending to the slower, acoustic 'Oklahoma On My Mind' and the desert feel of the more jittery 'West Virginia On My Mind'. Yet, at the same time, on the autobiographical 'Exile', torn between two continents, she sings about her fears for her homeland and the acknowledgement that the land of the free is these days more a case of free-fall, the urgent rock n roll piano and fiddle boogie protest-lined 'Last Train To Sanesville' sporting the line "come on pilgrims we've been derailed," Trump clearly the engineer. it's back to a bluesier feel

The album charges into the final leg with the bouncy train-time rhythm of the lyrically playful kiss-off 'Fare Thee Well Blues', keeping things rollicking with the self-descriptive 'Hillybop Bop' and the fiddle, banjo and slide guitar stomping 'Said And Done', before closing on the haunting slow sway of the old-time Texicana flavour of the sepia-toned nostalgia of 'Lone Wolf Waltz', Leclerc and Bertrand adding their respective fiddle and pedal steel ache of its hymn to not giving in to the world.

"I'm lost in the music, can't settle down", she sings. If album's like this are the result, long may she have a vagabond soul.