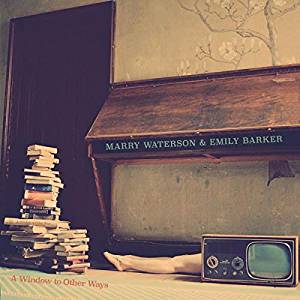 
This album is beguilingly described as “an album of fly-on-the-wall observations of the contradictions and disconnections of modern life”, also however as a special one-off collaboration. In effect, it’s a meeting of like minds, one that began life at a songwriting retreat organised by Kathryn Williams. The story goes that once Marry began to weave her words into Emily’s banjo figure, their kinship was obvious and their first song together, I’m Drawn, was uncannily swiftly written. That song’s compelling natural conflagration of differing folk stylings became a recurring trait, a modus operandi without a badge, for more collaborative writing that was found to push the boundaries of each writer’s respective brand of folk and indie styling.

This was done by the two songwriters getting together largely at their own homes (Robin Hood’s Bay and Stroud, Glos.), soaking up the atmosphere and associations of the place for a uniquely creative dialogue. A most unexpected consequence was the strong sense of natural counterpoint between Marry’s often very dark lyrics and Emily’s “naturally sunny” melodies, which arose as much from the spirit of playful experimentation of those get-togethers as from the ancillary – though vital – invited input from the third crucial member of the “team”, multi-instrumentalist Adem Ilhan, whom Marry and Emily had also met at the retreat and with whom each lady wrote one song (both of these also appear on this album). It turns out that Adem was Marry and Emily’s first choice of producer for the album, and there’s no denying that his “sixth sense” for the right kind of musical setting, together with his distinctive weaving, swooning cello ornamentations for songs like Twister, I’m Drawn and We Don’t Speak Anytime, give this collection of songs a striking sonic signature all its own. Additionally, the shortest song on the album, the extraordinary Disarm Me, arose out of Adem experimenting with a music box while Emily responded with lyrics. Elsewhere too, the studio sessions were loose, and allowed the songs to take their own path.

The most (what I’d term) “Watersonian-sounding” creations, mood and mode-wise, are the sublimely eerie title song, the ambivalent, ostensibly apologetic It’ll be Good and forlorn bluesy album closer Going Dark, although Marry’s lyrics and Emily’s sometimes peculiarly-crafted melodies are given an almost other-worldly dimension by Adem’s strange-but-wonderful production, which is masterly in capturing the essence of the writing and only occasionally strays into gimmickry (eg Trick Of The Light’s over-treated vocals). Much thought has been also expended on the enigmatic cover art and photography; the “mirrorhead” cover shot may seem a decidedly weird reflection of the contents of the album until you’re listening to it, and then it all starts to make sense.

There’s an enticing eclecticism to the proceedings too, taking in folk, country, indie, blues and chanson but never directly referencing any of these. But it’s possible to give some pointers for the curious: the breezy Muffin-esque indie-pop of Perfect Needs recalls The Rails (appropriately perhaps, since Kami Thompson had contributed to Marry’s 2015 album Two Wolves), while the trippy, edgy Little Hits Of Dopamine has the aura of one of Robert Plant’s space-shifting sand-raising adventures, the eastern-flavoured, mbira-led All Is Well embodies a trancey ambiguity, and Drinks Two And Three eventually brings an enigmatic jangly psych vibe to its woozy country-tinged waltzery before the door closes abruptly on the vision. I must also not forget to mention the sterling contributions from Emily’s live-band-mates Lukas Drinkwater and Rob Pemberton (double bass/guitar and drums respectively) – no conventional “rhythm section”, but two imaginative and responsive musicians playing for the songs.

Perhaps in spite of its inclusively cocoon-like arrangements, A Window To Other Ways is a nervily intimate and often quite disturbing musical experience – but definitely one not to be ignored. It’s a distinctively visionary set that will surely be a strong contender for the year-best lists. And let’s hope it’s not just a one-off collaboration between these artists.