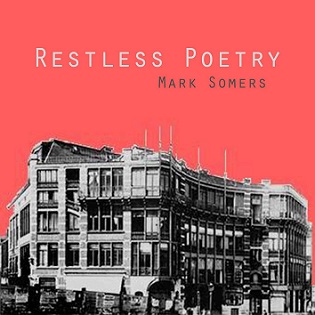 
RESTLESS POETRY is the aptly named second solo album by Belgian singer-songwriter and guitarist Mark Somers. He is a fine guitar player, creative vocalist, thoughtful lyricist and someone you should definitely know more about. Thematically the album is about breaking down political and physical borders. Musically it shifts between genres, as fearless of boundaries and edges as Somers is. Eight of the fourteen songs are based around poems by Langston Hughes, one of the founding fathers of Jazz-poetry. The poems chosen are all from the 1920s, when Hughes was the voice of everyday black America. Somers and his mostly English band, run with the dry Ellingtonian Jazz Hughes later burnished his recorded readings with, producing an engaging album.

'Refugee' is a Somers original, but is as keenly observed as Hughes' writings on Harlem in the Jazz era. The beat is infectious and the brass line part Ska part dry Atlantic Records Memphis soul. The lyric is a savage condemnation "how can I be illegal on this earth." 'Hordes' crooned like a politically aware Kevin Ayers with a touch of Vivian Stanshall absurdity, unpicks the acceptable face of the welcomed but barely tolerated economic migrant. The writing is powerful, a mix of big ideas and carefully observed but absurd details. Strummed guitar and beautiful supporting voices sweeten a song that leaves none of us looking good. 'Letter To Norma' with David Bowie Jr's evocative bowed double bass and Somers' fine guitar, unpicks Mark's connection via his parents record collection to Hughes, Blues, Jazz, Funk and Soul. Linking it to Norma Waterson, a discovery of his own. Diary like, the talking blues song details his joy at discovering her music and the letter he wrote her. There is a joy in the integrity and honesty of song writing about real life and real things. If you have spent fifty plus years under a rock and not heard Norma, her "delicate phrasing and wonderful tone", then you really should. Mark doesn't mention which album triggered his revelation, I'd recommend her 1996 Hannibal Records self titled album. 'Fascination' is the first Hughes poem set to music, a genuine love song reimagined as wonderfully played 60s John Renbourn folk blues piece, with Soames' distinctive vocal and nimble acoustic picking. 'Empty House' again with delicate perfectly phrased brass and fine guitar is Langston Hughes words exploring loneliness and isolation, as current and relevant as the rest of RESTLESS POETRY.

This is carried on in Langston's 'Afraid' which connects our urban fears with our ancestors fear beneath the canopy. We are more the same than we are different is a theme through this album. 'Sweet Turmoil', a revisit of an earlier song, has an uneasy European or North African feel care of Rory Scammells hurdy gurdy, a strange guitar sound and an insistent snippet of a lyric. 'Better' is a wonderful groove of a song, carried by Sekou Dioubate's sweet Kora duetting with Somers guitar. Dusty desert blues and quite stunning. 'Weary Blues' is a Langston poem that evokes the joy at live jazz perfectly. Some of the imagery has dated a touch, but Somers dry sincere voice is spot on, as is Luc Wielockx's rich saxophone playing. 'Saturday Night' is another stunning track, Mark's Saxophone conjuring the effortless slipperiness of 90s jazzy John Martyn. 'Subway Face' is another poem fragment of chance and separation, spun into a groove and a song. Another chance too, to listen to Sekou's shimmering Kora. 'Bumpin @Sunset' is a jazzy, almost abstract piece recalling watching his dad taking photos on the beach. It is Philip Larkin-esque contemplating memories and moments. It's Jazz might be a little modern for Larkin, but the arrangement and the playing is simply sublime against Somers lyric and voice. What will survive of us is love indeed. 'Gods' is a riddle like Langston lyric, considering the piano, Jazz and the power that we ourselves create and wield. Strange and beautiful too are the saxophone notes, Somers' edgy guitar and David Bowie Jr's stunning and very Danny Thompson double bass. The track closes the album, descending into a Charlie Mingus Tijuana Moods dreamscape, a strange and surprising ending to a strange and compelling album.