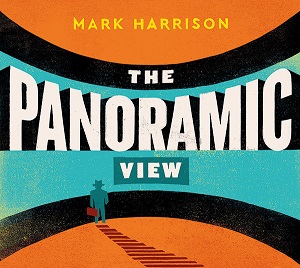 
Mark’s not only one of the most assured singer-songwriters on the scene, but also a tremendously accomplished National and 12-string guitarist. Mark’s trademark is a quirkily reflective look at contemporary life, generally couched in an idiomatically rootsy bluesy-folk styling, and this winning combination has so far seen him through five studio albums and a live set, all of which have been frequent visitors to my CD player – ample testament to their consistency and staying-power. Six years ago, I described Mark’s second album (Crooked Smile) as “seriously tasty”, and that tag will surely be Mark’s epitaph!

Mark’s latest offering, The Panoramic View, is entirely in keeping with his previous records in all the important ways: absolutely top-drawer musicianship; perceptive, empathic and often wry commentary, often (cleverly) from another person’s viewpoint, that makes you think again about the realities and tribulations of life; impeccable recording and engineering, with abundant presence and clarity; and “proper” packaging that once again observes the established, exemplary house-standard that was set right from album number one, complete with signature stylish artwork and a booklet including full lyrics. Where The Panoramic View differs from those earlier albums is in in one purely audio aspect of the album’s presentation – each song is prefaced by just a few well-chosen and relevant words of introduction voiced by Scottish TV personality Gail Porter. These give something approaching the background information regarding the inspiration for, or story behind, the individual songs, and with commendable economy of expression often reveal useful facts helpful to our understanding of the songs too. For instance, several of the songs reference vintage bluesmen (eg Rediscovery Blues and What Son House Said), and Mark’s erudition is invariably used to the benefit of his songwriting. (Incidentally, format-wise, Gail’s spoken intros are conveniently appended to the close of each preceding track, if you see what I mean – which makes it easier to skip them on subsequent plays should you wish.)

The musical idiom of Mark’s creations is genially eclectic, thoroughly accessible, light-textured yet rich, an enticing cocktail of flavours stemming from such modern exponents of roots-country-blues as Chris Smither and Ry Cooder while also displaying something of the cheeky good-time vibe of Brett Marvin or early Mungo Jerry. It’s fresh, bouncy feelgood music with a difference – in that it also invites you to ponder on the observations within. Also, tucked away in the tracklist is a delectable ragtime-flavoured instrumental, Pool Meadow Strut, which is named after a bus station in Coventry! Mark’s own guitar expertise is brilliantly supported by regular band-mates Charles Benfield and Ben Welburn who form his trusty rhythm section, with occasional embellishments from guest musicians and singers including Paul Tkachenko (brass and mandolin), Paddy Milner (piano) and Ed Hopwood (harmonica).

Needless to say, the whole album’s eminently satisfying, and virtually self-recommending on all of the above counts. Why on earth Mark’s talent is not more widely celebrated remains one of life’s big mysteries…