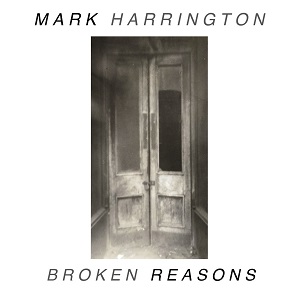 
Mark Harrington is a singer-songwriter based in in Leeds. Broken Reasons is his latest album and available for digital download via BandCamp. This album features 10 songs all written by Mark and is very much a family affair - his sons Ed (guitar, bass guitar, piano and backing vocals) and George (percussion) feature throughout. Julia Morgan sings backing vocals. Mark's guitar playing throughout is accomplished.

The ten songs are a personal collection of reminiscences and follow a similar format, which for a single song may be fine, but for an album I prefer more light and shade and the occasional injection of pace.

Having said that, the songs are well constructed but I would have liked to hear Mark's vocals a little higher in the mix.

This is a gentle album of gentle songs - you won't find overblown production here - no just honest-to-goodness lilting guitar-based songs such as the opening Awaken the Swan and the title song Broken Reasons.

Liberty is one of the stronger tracks here but I wanted more, the song was just getting going when it ended.

Most of the songs are around the three-minute mark. Having said that, some good things do come in small packages, perhaps I'm just greedy!

This is an unashamed guitar-based album packed with reflective songs just waiting to be discovered.