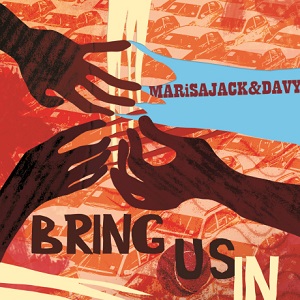 
A Bedford-based folk trio, their self-released debut EP offers an eerie and melancholic take on the British folk tradition woven through three-part harmony, fingerstyle guitar,organ drones and percussion. The first of five traditional tunes is the 'Bring Us In Good Ale' title track, a dirge-like medieval wassail, its slow, lurching pace rather at odds with its call to knock back a few refrain. Marisa on lead vocals, 'Bushes and Briars' picks the tempo up slightly, still keeping that courtly troubadour mood while, maintaining an earthy, sober pacing, they then slowly sway their way through 'Nottamum Town'.

The sole departure from traditional paths comes with 'Oak and Ash and Thorn', Peter Bellamy's arrangement of Rudyard Kipling's celebration of the magic and mystery of nature, a reading here you could imagine having been part of The Wicker Man soundtrack. Then it's off over the border for a fingerpicked accompanied, three-part harmony setting of 'The Sun Rises Bright In France' published in Allan Cunningham's Songs of Scotland, volume IV in 1825, and to which he claimed authorship, before wrapping it, in a lively percussion punctuated manner, into the sibling rivalry murder fiddle ballad 'Bows of London' aka 'The Two Sisters' or 'The Gay and the Grinding'.The trio learnt their craft hosting a regular folk night and it's easy to imagine that as a backdrop to the performances here, announcing a welcome new addition to the ranks of those not just keeping traditional English folk alive but breathing in new life

The Pits That Scar The Land