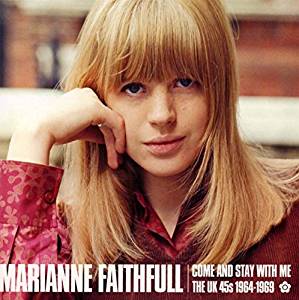 
This is a very useful release, particularly coming in the wake of Marianne’s magnificent new album Negative Capability. For it presents a golden opportunity to reassess the first hectic phase of the chanteuse’s career – her so-called “pop star period” – as viewed through the lens of the series of 45s released between her iconic yet arguably naÏve 1964 debut As Tears Go By and 1969’s “angel of death” gothic masterpiece Sister Morphine. Shortly after the withdrawal of this single from release, thoroughly disillusioned with the music business, Marianne broke away from it all until her brave return almost ten years later, crystallised by her landmark Broken English album (which, as we learn from the compilation’s booklet note, brought continuity by including a new version of Sister Morphine on the B-side when the title track came out as a single). Marianne’s path from a manipulated “something you can make into something” teenage singer with pretty looks and a pretty voice to a gritty, defiant, self-aware songwriter was a hard and difficult one, and is only partially illuminated in this collection, since it can only present one face of the coin so to speak, but we can now listen between the lines. Many of the individual tracks prove revealing nonetheless, and hindsight provides some intriguing nuances, which are further illuminated by the excellent accompanying booklet essay by Kris Needs. (For instance, we learn that Jimmy Page played 12-string on several of these sides… but I digress!)

Listening in proper sequence to these tracks chosen for release as singles, at times it’s almost as if they inhabit a different world from the workaday pop scene of the 60s – and yet, so many of them epitomise the decade, not least in terms of their vogue-ish qualities or adventurous arrangements. But what strikes me most today is the beautiful consistency of Marianne’s vocal identity throughout these recordings, and a quality of undersold expressivity that can speak volumes. The demure charm and delicacy of Marianne’s voice impart its own kind of strength, which has transcended the innocence-turned-to-anguish of her personal experiences over that crucial phase of her life and formed the resolute, determined character we know today.

There’s no filler here, no hastily-cobbled formulaic crowd-pleasing tunes among the collection – rather, each individual track is a discrete chanson, a journey in itself, and still sounding fresh today. From the unnervingly prescient, gently mournful folk-pastoral of As Tears Go By to the brooding, full-blown, almost-spaghetti-western-scale arrangement given to Greensleeves; the coquettish Jackie De Shannon cover that gives this collection its title to the drama-laden orchestrated epic House Of The Rising Sun (whose compelling a cappella opening harked back to her folk-singing days in Reading’s coffee-bars); the cut-glass pure-français of Et Maintenant (What Now My Love?) – one of four tracks making up her 1965 EP release – to the pounding Joe Meek rhythms of Mike Leander’s What Have I Done Wrong?; the melancholy deliquescence of This Little Bird and Bob Lind’s ethereal Counting to the first of her Donovan covers The Most Of What Is Least; the robust and knowing, increasingly mature delivery of the slinky That’s Right Baby and her cover of Goffin/King/Spector’s Is This What I Get For Loving You Baby?… while Marianne’s own 1965 and 1966 compositions Oh Look Around You and I’d Like To Dial Your Number are real discoveries, as is the gem of her withdrawn final Decca single Something Better, which like its utterly extraordinary flip Sister Morphine, was done to a spectral, scrawny backing track featuring Ry Cooder and Mick Jagger… All of these examples demonstrate Marianne’s increasingly piquant vocal conviction, her finely-honed interpretive ability, her incredible natural capacity for teasing out the very heart of a song.

This is an excellent and well-presented collection; all we need now to complete the picture is a proper reissue of Marianne’s first couple of LPs (to complement BGO’s comparatively recent reissue of North Country Maid and Loveinamist), and her French and Italian-language singles (of necessity excluded from this UK-45s assemblage).