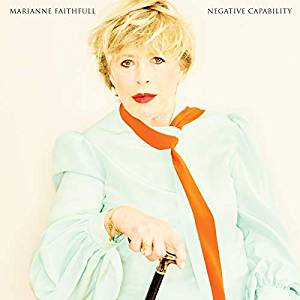 
Negative Capability is Marianne's 21st album in a 54-year recording career, and it's unquestionably an extraordinarily powerful emotional statement by whatever criterion. Here, at the age of 72 and recently diagnosed with arthritis, Marianne reveals her inner feelings like never before, in an unflinchingly honest autobiographical meditation, both addressing outright and reflecting on ageing, losing old friends, loneliness (living in her adopted city of Paris, where most of the album was recorded) and love. Her lyrics possess all the perceptive insight and hindsight necessary to universalise her personal concerns and traumas.

But initially it will be - at the risk of stating the obvious - the extraordinary quality of Marianne's voice that provides the album's core signature: it's at once stark, compelling, precise, considered, weighted with the years of harsh lived-through crises - and yet still intensely vulnerable amidst her tremendous interpretive confidence. Marianne's unique vocal performances are perfectly matched by ultra-sympathetic, ornate chamber-orchestral backdrops of great sensitivity that also possess a considerable intimacy - the listener feels so very close and drawn-in to Marianne's world, which is singularly appropriate.

To render her musical vision both complete and convincing, Marianne's enlisted Bad Seed Warren Ellis as co-producer, and she also deploys the special talents of PJ Harvey collaborator Rob Ellis, together with Rob McVey, Mark Lanegan and Ed Harcourt, the last two named providing a measure of compositional as well as instrumental input. Nick Cave also makes an appearance, joining Marianne on piano and vocal on the co-written song The Gypsy Faerie Queen, a Puckish Shakespearean allegory. Two tracks use Marianne's adopted city as a reference point: the desperately melancholy No Moon In Paris voices her surprisingly sanguine acceptance of life's changes in the guise of backward-looking reflection, while They Come At Night is a menacing, gritty rocker heavy with the ambience of all-too-real fear in the wake of the horrific 2015 Bataclan terrorist attack. And, back with life attitude questions, Marianne's personal take is unapologetically expressed on Born To Live and her deepest, albeit simple, desires for love are achingly voiced on In My Own Particular Way.

Although the focus of the album is Marianne's own compositions, one of the strongest tracks turns out to be a cover: an especially persuasive, if darker-hued and more knowing, take on Dylan's classic heartbreaker of lost love It's All Over Now, Baby Blue. There's also a revelatory revisit of Witches' Song, one of the key tracks on her own seminal Broken English album of (would you believe it?) virtually 40 years ago, which imparts more than just an added degree of poignancy to the song's final, memorable parting-shot "Remember, death is far away and life is sweet". Death may have been far away then, especially after the crisis from which Marianne had then just emerged, but she clearly understands the new irony of that phrase now. The theme of loneliness also recurs, not least in a plaintive account of Loneliest Person (the closing song from the Pretty Things' seminal rock-opera S.F. Sorrow) here given a sensitive scoring that's in stark contrast to the original version's simple acoustic guitar backing. Marianne's second chosen revisit for Negative Capability also focuses on loneliness; As Tears Go By is tellingly rephrased and gaining an extra layer of grace with the temporal remove of fully half a century. For after all, it is (truly) the evening of the day", as Marianne now knows only too well.

Negative Capability is both an admission of the truths and falsehoods of life, and a celebration that (unlike so many of her peers) she's lived to reach that stage of life; shot through with absolute integrity, the album represents a considerable achievement on so many levels.