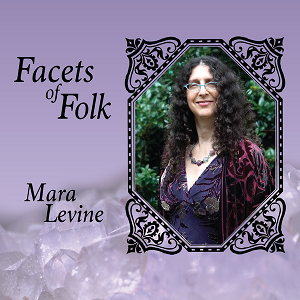 
A folk singer from New Jersey, clearly influenced by Joan Baez and Judy Collins, Levine doesn't set out to do anything more than to interpret her chosen songs in the spirit and style in which they were written, variously accompanied by banjo, dobro, accordion, cello, dulcimer, fiddle and flute.

Her selections range from familiar names to the far less so, opening with the latter in the form of 'You Reap What You Sow', an upbeat, lyrically positive bluegrass number by fellow New Jersey artist Susan B. Shann, before hitting one of the highlights with 'Daughters and Sons', a hope-infused protest number about those who banned and censored in their struggle against oppression written by Irish songwriter and activist Tommy Sands and previously recorded by, among others, Dick Gaughan.

If that evidences the Baez influences (and perhaps Judy Small), her cello-enhanced version of Cohen's 'Hey, That's No Way To Say Goodbye', a duet with Caroline Cutroneo, clearly nods to Collins. The two other best-known writers here are reserved for the final tracks with Gordon Lightfoot's folksy 'Bitter Green' and, a sort of album mission statement, Paul Simon's 'Song For The Asking.

Those they don't have the same profile, many should also be familiar with Si Khan represented here in a shimmering fingerpicked cover of 'Upstream', a Stan Rogers-styled protest song about the building of the Pebble Mine at the headwaters of Bristol Bay, Alaska where 40% of the world's wild Sockeye Salmon go to spawn. Likewise, New York-based singer-songwriter Christine Lavin whose chance encounter with a famous actress, inspired 'The Moment Slipped Away', a song reflecting on her own missed opportunities to make a difference in the lives of others.

Another New Jersey native, Terry Kitchen lends harmonies as wells plays bass, guitar and mandolin to Levine's cover of his 'A Perfect Rose', a simple folk song about how everything has its worth and avoiding wastefulness, written to counter John D. Rockefeller's claim that to get a perfect rose you had to prune all the other buds from the bush.

Though he may not be well-known in his own right, Bill Staines has had his songs covered by a wide array of celebrated performers, Levine opting for 'Child of Mine', a parent/child number on which she duets with Josh Joffen.

Delving into more obscure quarters, featuring Ed Trickett on hammered dulcimer, Eric Peltoniemi's 'Tree of Life' comes from the 1983 play 'Plain Hearts: Songs and Stories of Midwestern Prairie Women', the first two verses comprised entirely of the names of quilting patterns. Likewise, a relatively new name on the folk-Americana scene, Arlon Benett provides the fingerpicked Baez meets Harry Chapin 'Be The Change', a song about making your voice heard and making a difference inspired by the examples set by, among others Rosa Parks and Gandhi.

A similar theme grounds the waltztime 'By My Silence', the award-winning song by Ellen Bukstel and Nick Annis about the regret of keeping a fearful silence during the Holocaust, inspired by Rev. Martin Niemöller, a German Protestant Minister imprisoned for seven years in concentration camps for finally speaking out against the Nazis.

The remaining selection mines the traditional folk archive for the fiddle-accompanied 'Taladh Chriosda' which, with a translation of lyrics by Ranald Rankin, also goes by the title 'Christ Child's Lullaby', a hymn written in 1854 and subsequently set to a folk tune from the Scottish Hebrides.

There's no bells or whistles (literally or figuratively), just an artist delivering a personal selection of folk songs addressing loosely connected themes in a pure, unfiltered matter. And it's a treat.