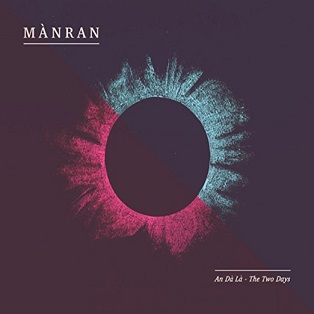 
Manran - a six piece Scots folk outfit who've been tagged with all manner of label from folk -rock to Celtic-rock to trad-rock. The inclusion of drums and bass might justify the addition of a 'drums and bass (and whistles)' tag as well, but a musical mix tape which comes highly recommended for anyone who likes their folk related music beefed up with a well versed rhythm section.

'The Two Days', their third album is defined by a mix of high energy attitude and vibrant dance fuelled passion - a set of material could be what you'd call 'gigged in' - refined over a meagre three and a half years worth of road testing, guaranteeing that the material comes well formed and bedded in.

The title comes from the Gaelic expression for great change, leading into what seems an album which hits two bases. 'Fiasco' opens proceedings with a dense flavoured tune set heavily featuring the pipes - the march signalling an entry into a reel before delivering the first of the contrasting s ong based material. 'Trod' is an amusing tale which translates into 'the woman of the house's row with her husband' and sets the tone for the Drever-ish 'Pandora'. Written by Canadian singer/writer David Francey it's perhaps the pick of the song based material. A gentle friendly shuffling rhythm yet again dealing with a contemporary issue. The clue's in the title; the ease with which the interest allows the spread of information for good and for bad. Ben Harper's 'Alone' is delivered in a similar low key fashion in contrast to the high spirited energy of the tunes sets.

Topical to the tee, the bi-lingual title track is directed at Mr Trump using his mother's naïve tongue. Take note Mr President elect Sir. The precarious nature of our ever changing world addressed in the lyric and accompanied by a slowly building accompaniment of anthemic quality.

Dotted inbetween the songs, the tunes sets bring to mind the sort of effervescence you'd find in fellow Scots Treacherous Orchestra in a mini version (ie, six piece rather than eleven or twelve piece) - the Shifty Sextet if you like? 'Inspector' works the 'Pot Inspector' tune, inspired by washing up with another march and then 'Parallels' (not the one by prog giants Yes) and 'Autobahn' (not the one by German electro pioneers Kraftwerk) - come inspired by low budget wines, gold accordions, high speed travel and a tune from the Jarleth Henderson tunebook. The latter pair of tune sets combine the intensity and the more jaunty and lighter aspects.

Coming full circle with the admittedly rip roaring jig and pipe marauding effort 'Hour' will find a fully spent band certainly in terms of being perfect gig fayre with the sort of potential incendiary fire to send a lively crowd into a frenzied seething mass. It might be easy to underestimate, possibly even dismiss the songs in the thrill of the instrumental prowess but ultimately they are most rewarding.

With Celtic Connections about to kick in and provide the vehicle of the album launch, hopefully the chance hopefully to appreciate a forthcoming season of Manran live experiences.