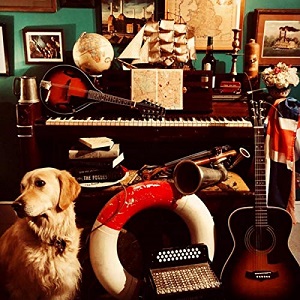 
According to their Facebook page, the London-based five piece "play raucous, upbeat folk music for those who like a drink with their tunes". Well, alcohol may be a help, but this too often more shanty shandy than the strong brew of The Pogues, Merry Hell, or Skinny Lister. Quite where the supposed comparisons to Bellowhead and The Oysterband come from is beyond me.

Lining up as frontman Rich Quarterman, bassist Sam Barker, drummer David Vaugan, Daniel Gilroy on fiddle and whistles and Aaron Horlock doubling up on mandolin and accordion, it's not that their debut album is poor or badly played, it's just that it's far too often somewhat average.

Save for three numbers, Quarterman provides all the material, the bulk of which centres around women and booze, indeed Wetherspoons gets a mention within the first two lines of opener 'Northern Girls', a song in praise of, well, northern girls, Blackpool in particular but generally anywhere "From Merseyside to Manchester from, Carlisle to Crewe", though how they'll take to being depicted as tough as nails, singing drunken lullabies and emasculating their husbands I'm not sure. Likewise the drunken 'romantic' encounter of the roistering 'Carry Me Home', as, refusing to quit the pub while the taps still flow, our blotto boozer tenderly describes his pick up as having " a face like the north side of the Eiger/Powder white and craggy underneath /Head to toe in the dead skin of a tiger/But nobody could see beyond her teeth", while 'Canvey Island Girl' would seem to be about a fairground quickie with some girl from the beach, but does slip in a reference to Wilko Johnson so that's okay.

And yet, countering all this, you also get 'I Have A Thirst', a powerful song about alcoholism while, despite yet another reference to being drunk , brushing up their Shakespeare,'There's A Light Still On At The Cock Hotel', a Black Scarr-like duet with Eleanor Ruse, is a song of star-crossed lovers that, noting how "forever is full of dead ends" namechecks Romeo, Malvolio, Juliet and, charting how things can turn sour, ponders "how did my rose by any other name turn into Lady Macbeth?"

In fact, the second half of the album's self-penned numbers far outweighs the first, closing track 'The Highgate Bells' (featuring actual church bell ringers) is solid swayalong break-up/new love/leaving song while festooned with brass and a gypsy cabaret mood cabaret mood, 'The Walpurgis Hotel' has Quarterman sings how "it's easy to get lost in the darkness if you run towards the light", essentially a song about selling your soul while "they're putting make-up on Mephistopheles".

Striking another social commentary note, the lurching dub-shanty 'When The Ship Goes Down' strikes a Brexit note about how "we should be blaming the banks not the refugees" for bringing the country to its knees. It has a Levellers quality to it, but, on the other hand, while 'The Battle of Cable Street' draws parallels with Oswald Mosley's neo-Nazis and the need to take a stand against today's right wing fascists who "spout hate without repercussions" it can't help but call to mind the similarly-themed but far better 'Ghosts of Cable Street' by The Men They Couldn't Hang.

Turning to the serviceable non-originals, two are instrumentals, the traditional 'Gravel Walk' and the 90-second 'MacArthur Road' fiddle stomp by Dave Richardson & Boys of the Lough, while the third is Jon Boden's accordion arrangement of Rudyard Kipling's 'Rolling Down To Rio'.

So, something of an uneven affair, but, with some tightening up of the ballast in terms of melody and less of the drunken pub crowd carousing, there's enough indication of potential here to not abandon ship yet.

When The Ship Goes Down