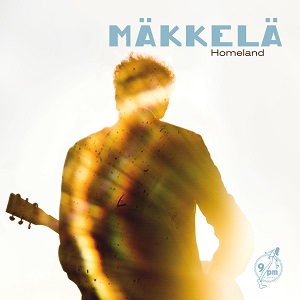 
Finnish songwriter Mäkkelä takes us on a journey less trodden with his latest offering 'Homeland'. Opener Tuesday's Lillies is full of imagery, with delicate violin layered over a single guitar really brings out the lyrics of this song and sets a high benchmark for the rest of the album.

The whole record is incredibly versatile and varied. Dancing between reflective ballads, Jazz and Blues-Rock with a pinching of Punk spirit., Mäkkelä manages to not necessarily blend styles, but instead you feel is rather a less conscious, more natural way of writing songs by drawing on all your influences, rather than honing down one particular genre to suit any particular audience.

A Tenner, An Album, A heart is a humorous tale of life on the road as a musician, which without spoiling the story, is a must listen for any musician.

Border Song is a definite contender for a political song of the year. Written whilst on tour in France during the Bataclan attack, there is raw emotion in this song and has a feeling of being written out of necessity at anger of the situation.

Keep it Light Enough to Travel is one of two covers on the album, written by Canadian Accordionist Geoff Berner, is a dark ballad reflecting on being displaced in a world that feels ever more distant. A very beautiful track which leads into Homeland, the title track which is gorgeous ballad which neatly ties up this album.

This album grows on you with each listen and is a definite musos album. With definite echoes of Tom Waits, Leonard Cohen and the booze lashed, cigarette stinking romanticism of Shane MacGowan's lyrics, Mäkkelä takes a less trodden path and invites you on his journey in search for a 'Homeland'.