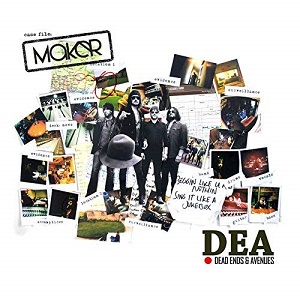 
They say they're from Kent, but really they're from 1968. They say they play in a band but really they channel the dusty spirits of Hush-era Deep Purple, the first Faces album, Humble Pie's earliest jams and the MC5 in more together moments. Made with eerie authenticity this forthright debut album cuts through the noise like a psychedelic blues-rock Exocet dressed in swishy satin and tat.

Yet for all their period details, Maker are right at home in the modern world as enthusiastic reviews of their live shows amply attest.

Singer Allessandro Marinelli's voice might just be the missing link between Steve Marriott and Rod Stewart, making it the perfect weapon to lead the charge on album opener Soul. It's also powerful enough to stand out above the band's gutbucket performance yet sufficiently nimble to capture and carry off the interest of the listener - this is the sound of a singer in full command of his forces.

There's no let up in pace as Maker storm an opening three-song salvo completed by the title track and the burning Move Your Feet before dropping down a gear with Girl Quit Your Crying, then delving into their R&B roots on Quick Getaway and laying on some piquant Burrito Bros' country stylings for the narcotically-inclined John's Pharmacy.

The pace picks up again with Curtain Call as the band drive on towards the album's beautifully measured crescendo, the snake-hipped slick soul grease of She's On a Replay before a final reprise of the opening track that'll leave ears craving more of this fine stuff.

There should be much more to come from Maker, but what happens next is anyone's guess. It's to be hoped the album is a jumping off point to some extraordinary flights of fancy - more Primal Scream at their bravest, rather than Black Crowes at their laziest.

Keep it up chaps!