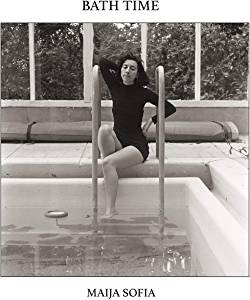 
Perhaps it is the elemental magnificence of the scenery that runs the length of County Galway's coastline, with those dramatic sunsets over the Atlantic Ocean, and the knowledge that the nearest land to the West is more than two thousand miles away. Or maybe it is this very beauty and isolation that, even though she now finds herself based in Dublin, still influences the ethereal elegance of Maija Sofia'a debut album, Bath Time?

The title refers to the daily ritual of daily washing and bathing, a time and place where Sofia found the time to wrote many of the lyrics that found their way onto this album. It follows hot on the heels of an EP and several single releases, including last year's 'Flowers', which was also released on London label Trapped Animal, and was highly rated by DIY magazine. The Irish Times also named her in their list of '50 People to Watch in 2019'.

The nine songs on 'Bath Time', written during time spent between London, Dublin (where she studied English Literature at Trinity College) and Galway, are steeped in the traditions of story-driven Irish folk music, and create a contemporary collusion of story-driven balladeering with lo-fi dream pop. The delicate timbre of her voice lends atmospheric intensity to stories that are sometimes based on legend, sometimes on historical fact, and frequently seize on the misrepresentation of women throughout history. These are tales of doomed or failing relationships, and the recounting of the wisdom of mothers as mothers retrospectively address their children.

Recorded by Chris Barry in Ailfionn Studio in Dublin, 'Bath Time' opens with 'The Gold Shoes', tentative vocals and gentle electric guitar reminiscent of early recordings from New York shoegazers School of Seven Bells. She is augmented by melancholic keyboards in 'Hail Mary', and joined by Laura McCabe (cello) and Niall Murphy (lap steel) for 'Edie Sedgwick', in which the fashion icon and muse of Andy Warhol is celebrated, but tragically describes the fate of any woman that allows her identity to be hi-jacked and shaped only for the relationship to end in tragedy.

'The Wife of Michael Cleary' recalls the sad but true tale of how, in Tipperary in 1895, Bridget Cleary was burnt to death by her husband in the belief that she had been abducted by fairies and replaced with a changeling. The case was famously used as propaganda by British media to depict rural Irish folk as backward and superstitious, and to try and humiliate the cause of Nationalist politicians as well as the Catholic church.

'The Glitter' is an ode to troubled writer Jean Rhys, whose 'Wide Sargasso Sea' is now considered a modern masterpiece. Sofia's vocals are supplemented by the doleful violin of Christophe Capewell.

'Cobweb' explores loneliness and the passage of time, whilst 'Morning' employs an ironic twist to describe the passing of a flawed lover. 'Elizabeth' is brighter, and more hopeful in its tone, paving the way for the philosophic ruminations of a mother who was forced into marriage too young in closing song, 'The Trees Do Grow High'.

This is a brave debut from Maija Sofia. It would have been very easy to exploit her ethereal vocals and songwriting stengths to romanticise her native Ireland. Instead she uses this debut album to make a defining statement about the role of women, and seeks reparation for their misrepresentation over the centuries in both culture and legend.