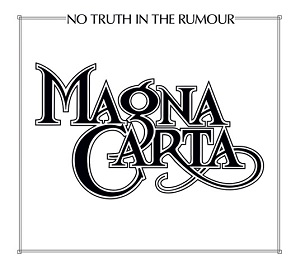 
Chris Simpson can rightly claim to be one of Yorkshire's favourite musical sons. Viewed primarily as a folk artist, he has never been afraid to push the musical boundaries. Having formed Magna Carta in 1969, it is good to report that Chris is still performing his particular brand of music today.

This new album, "No Truth In The Rumour" is a rerelease of the 1979 vinyl issue written and produced at a time just after the breakup of the original band. It is a time that Chris describes as one of the greatest decades ever in terms of music. Listing a number of outstanding artists from that period and asking where the new ones are, he goes on to say that "This is not melancholic nostalgia; I believe it is the truth." I know and understand where he is coming from.

So what about this album? It can best be described as a multi genre album and will come as a surprise to many listeners who have only seen Chris and the band as folk artists. One of the tracks that best shows this change of style is "Wind On The Water." A slow ballad with more than a touch of a film score to it. A total contrast to this track is "Call Me" with its vibrant rock beat.

The album includes a bit of rock, blues, country, Americana and folk amongst its 14 tracks, none of which can be accused of being the same. It could most certainly not be more different to "Seasons" which was my introduction to Chris and Magna Carta back in the 70's. In fact I saw them in concert in Yorkshire in 1974, my first live gig having returned from living in Africa for five years and having been deprived of quality music. For that reason alone they will always hold a special place in my heart.

The quality and variety of the lyrics on offer here are one of the reasons that Chris has maintained his song writing reputation. That and the fact that he loves to experiment musically means that Chris will always be a major influence on the UK music scene and a lasting tribute to the talent on show in Yorkshire. After all, it is not referred to as "God's County" for nothing.