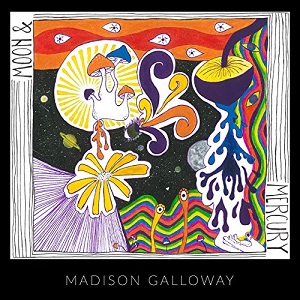 
There's not a lot of musicians who can claim a debut album by the age of 19, and there's even fewer who can boast that it was a good debut album. Fortunately, one who can do both is emerging Canadian singer Madison Galloway. Having grown up in small town Fergus in Ontario with a love of roots music, she already has hundreds of shows under her belt, touring relentlessly with band, duo, or on her own. While this is Galloway's debut album, she has already released the well-received EP Who Knows Where in 2016.

Moon & Mercury features an abundance of influences, with indie, folk, rock, and blues all featuring throughout. It kicks off with the high tempo Can't Buy Time, which perfectly introduces Galloway's key strength, her voice. Full of depth and character, she has an impressive range, from hitting the highs on the likes of Love's Not A Game, to the fragile tones of her gorgeous cover of House of The Rising Sun. The album doesn't all hinge on the vocal performance though, and she even throws in an instrumental with a distinctly world music feel, with Coffee Stains.

Highlights on the record include the jaunty upbeat Bye Bye, featuring probably her best vocal performance. Pick of the bunch though is My Baby Don't Care, a blues infused track which is absolutely gorgeous.

All in all the album is a pure joy from start to finish. Madison Galloway is a real talent to keep an eye on, and with the promise on display from Moon & Mercury, surely she's destined for the big time.