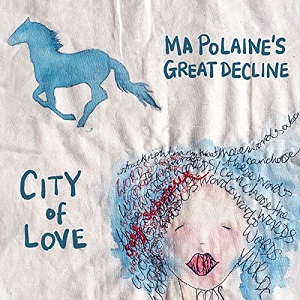 
Ma Polaine's Great Decline are one of those bands that still feels like a bit of an underground discovery, despite them being on their third album and picking up more and more fans. On talent alone they deserve to be a huge name (as opposed to a long one), and current fans can deservedly feel a bit smug for finding them early on. The creative heart of Beth Packer and Clinton Hough are joined this time around by Pete Flood and Martin Elliott, a surprisingly pared down lineup for an album featuring so many layers.

It's hard to describe the music on City of Love, purely because it fails to fit neatly into any category. There's an upbeat Americana feel to much of it, but there's blues, roots, jazz, soul, country mixed into the pot as well. But of course it doesn't truly matter how you try and describe it, because at it's heart is a wonderfully enjoyable album with strong storytelling. It's so enjoyable the CD is at risk from being worn out from overplaying.

The band take inspiration from the "curious and the interesting", and that leads to strong storytelling throughout the record. One of the highlights is Morphine which is wonderfully described as "What Lucy In The Sky With Diamonds was for LSD, the one is for childbirth." There's not much you can add to that, except it's the kind of song that takes hold of you much like the titular opiate. Then there is Paris Is Burning, which was inspired by a trans woman and drag artist called Dorian Corey, and it's a celebration of being yourself, rather than the mystery of the mummified male remains found in her closet after she died.

Elsewhere we have songs about the rise of right-wing politics (Ghost Ship), the #metoo movement (We Won't Let It Be), and the perils of hedonism (The Wreck). While there isn't a weak track to be found, pick of the lot may well be the superb The End of the Road. This one was inspired by friendships within the LGBTQ community, and is one of the slower tracks. Packer's vocals are incredible; fragile but uplifting. It's the track the shines out on repeated listening, something a bit different but utterly delightful.

Frankly, there won't be many (if any) better albums out this year. City of Love feels like an essential purchase, and while that would be true in any year, it's especially true in 2020. Give this a spin and escape the many troubles out there. Let the warmth of Packers vocals and Hough's guitar take you somewhere safe to lift your mood. Simply wonderful.