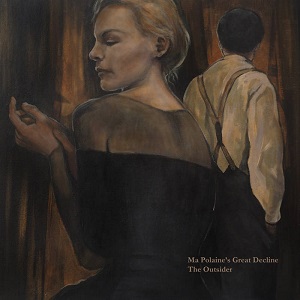 
In his 1956 analysis of Albert Camus's epic 1942 first novel The Outsider, Carl Viggiani wrote "... it is a dense and rich creation, full of undiscovered meanings...". It does not take much of a leap of faith to appreciate that Ma Polaine's Great Decline's latest, homonymously entitled release also warrants this description. It is indeed a record of profound maturity, with the listener being invited throughout to interpret their own meanings to the lyrics painted by Beth Packer.

Following critical acclaim for their 2016 Small Town Talk E.P., which augmented their 2015 nomination as an emerging artist in the British Blues Awards for the Get Me Out Of Hell album, after successful tours and festival appearances, together with the live band having gone through several metamorphoses, their December 2017 E.P., Down To The Sea, saw a return to their roots as a duo. Whereas all four songs on that release were covers, here all 11 tracks are self-penned, with Beth taking all lyric credits, whilst all music is jointly ascribed to both her and Clinton Hough.

Attempts to pigeon-hole the music created by this talented duo as 'blues and roots', or any variation on 'alt-folk-jazz-country-blues' is probably ultimately futile. Good music is good music. Ma Polaine's Great Decline create good music, ploughing a unique furrow that crosses genres in an original way.

Gone are the brass accompaniments, with Pete Flood’s drumming/cymbals, on four of the tracks, the only additional contribution to Beth's vocals, double bass, harmonica, accordion, piano and percussion and Clinton's guitars and percussion.

From the get-go of the opening song Carousel, a major-key waltz, Beth's heavenly vocals weave their magic over sultry guitar figures in a paean to love delivered in 4 minutes 20 seconds of unadulterated bliss. 'Lovers, intoxicated lovers/ No force it will uncover/ Your heart is all I long for/ You're all I need'

Wild and dark themes permeate this album, and on track two Beth's Cornish roots show themselves, as they did on Down To The Sea on the previous E.P. Here Fisherman's Fury, a murder ballad involving an angry fisherman and a mermaid, is a foreboding tale inspired by Cornish Folklore. Monster Swan Blues has hate and prejudice as its underlying theme, and sees an increase in tempo, as glorious guitar and perfectly understated drums synergise perfectly with Beth's voice which rings out magisterially.

A reworking of 2012 release, The Poison Sits, together with Can't Have You, give somewhat eerie love-related messages, the former of love's ability to engulf, indeed stifle, whilst in the latter, the obsession alluded to in the lyrics leaves little to the imagination: 'If I can't have you, no one else will/ I'd lose it all for you'

On songs such as Crazy and Gonna Be Rain, whilst instrumentation, including dreamy harmonica, is often to the fore, it is never allowed to obfuscate the vocals, which glide and soar, subtly changing direction, and style, with apparent ease. Beth has a voice of rare beauty; dynamic, vibrant, sultry and, at times, pulsating.

Harmonica features again on Little Lady, a deceptively simple song of social conscience, bemoaning the situation which allows unfortunates to fall through the cracks in society, before another change in musical style is heralded with The Lion's Head, a stompy blues number which recalls steamy nights on the town. The final offering, Old Fashioned Goodbye, is an intriguing number depicting the scene of the singer's own funeral. Whilst musically it is sombre in timbre, lyrically the song points to a rather more sunny outlook on life and death.

The overall packaging of the CD is good, with lyrics included and a wonderful cover painting by Peter Campbell Saunders - is this his impression of Ma Polaine I wonder

If there was a concern that the sophomore offering from Ma Polaine's Great Decline would not match the standard of the first, then let that worry be put to bed now. The music presented on The Outsider surpasses that of the debut, and undeniably gives evidence as to the upward direction being taken, to state the obvious: - False news - there is no great decline here.

The Outing is an album to be relished, the aural delights proffered are plentiful and compelling, with a mark of individuality that is refreshing.

Down To The Sea