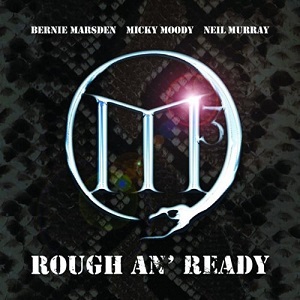 
Right first of all let me apologise for the lateness of the is review.

So when I popped it in to the CD player this morning while I did my ironing, yes we bikers do iron clothes, it was with a certain amount of trepidation

Let me explain. For many years I worked as a duty manager at my local concert venue, the Ipswich Regent or if you are old enough The Gaumont and I have seen many acts that say featurin members of, or so and so' version of. One example springs to mind Hot Chocolate was booked to play, I knew something was wrong when the singer had hair. Needless to say I have had a bit of a dim view of such acts.

However there is always and exception to every rule and my god M3 featuring Bernie Marsden, Micky Moody and Neil Murry are that exception. Rough An' Ready is a live album recorded during the summer of 2004 at The Mechanics Club, Burnley and heaven only knows why it has taken this long to reach the light of day.

From the opening chords of Walking In The Shadow Of The Blues I was transported back to a hot sweety night at the Ipswich Gaumont on the Slide It In Tour in 1984.

All the classics from the best years of Whitesnake are here, Dont Break My Heart Again, Lonely Days Lonely Nights, Hit An' Run, Slow An' Easy, Ready An' Willing, Aint Gonna Cry No More, Crying In The Rain, Fool For Your Loving, Aint No Love In The Heart Of The City and Finally of course Here I Go Again.

The songs really need no introduction as they are all classic Whitesnake. So what about the musicianship which I will be honest has always been a bit of a bug bear with me regarding bands such as this. Well it is tight and none of the three main guys, Bernie Marsden, Mickey Moodey or Neil Murry have lost any of the magic they had all those years ago when they were in the original Whitsnake.

So what about the other guys in the band. Well the most obvious is Steffan Berggren on vocals. First of all he does not try to be David Coverdale, which is good. However his vocal style sits extremely well with the songs and in my view he equally matches the original version of each song. The keyboards are provided by Mark Stanway and let's be honest he had very big shoes to fill in Jon Lord and on this offering he filled them quite well. He was tight and oh that Hammond organ sound just exquisite, also he does not try to recreate those awesome solos which for me is good. Finally the drums, these are provided courtesy of Jimmy Copley, again having to replace both Ian Paice and the late great Cozy Powell is no mean task and he does.The drums are tight pounding and the backbone to the whole performance.

So conclusion time, well my views have been changed to say the least.

Instead of thinking I aint going to see them if they come my way I will be there down the front stomping my foot with the rest.

If you like your Whitesnake when Mr Coverdale had dark hair and still spoke with a Yorkshire accent then you are going to like M3 simple as that.