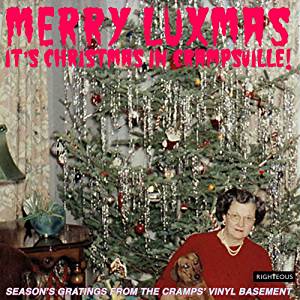 
Following swiftly on from the Crampsville Trick Or Treat Hallowe'en special (reviewed here last month) comes the latest seasonal release - and it's a sleigh-full of fun. Subtitled "Seasonal Gratings From The Cramps' Vinyl Basement", I guess it was inevitable that Lux and Ivy would get around to bringing out a Yuletide comp sooner or later, and this one sure lives up to the intro blurb in its booklet: "what better place to be at Christmas than hiding away from the family and sifting through a few crates of suitably seasonal 45s"! Yo!

The 31 choice tracks assembled together on this comp prove a great listen, even if you think you're already "holly-ed-off" and "turkeyed-out" with the glut of sickly seasonal mush elsewhere. There's everything you could wish for in the stocking - kicking off with a brace of rocked-up jinglebells from the mid- and late-50s, movin' on through an abundance of jazzy doowop Rudolphs (pick of these being the Melodeers' 1960 treatment) to visit a savvy pygmy tribe (The Marquees) celebrating Christmas In The Congo, before retracing our steps for Swingin' Santa with Sandy Baron and 12-year-old Sugar Chile Robinson for a cheeky Christmas Boogie. That's eclipsed somewhat by 10-year-old Gayla Peevey's I Want A Hippopotamus For Christmas which takes the hippothetical into the realms of the hippocritical (ho ho ho!) - note this is the original 1953 version of the novelty hit recently covered by Kate Rusby on her latest Christmas platter, by the way! The beatniks are represented by Ed Byrnes, but the epitome of cool is Tony Rodells Larson's Cool Yule from 1962. And the "lonesome at Christmas" category is well served, too, by soulful numbers from Julia Lee, Floyd Dixon, Little Esther & Mel Walker and J.B. Summers. But then again, how can anyone resist Jimmy Butler's come-on to Trim Your Tree?!

The epitome of cheesiness must be Spike Jones' canine croon through O Christmas Tree (give him a leg up!), whereas some less expected seasonal takes come from bluesmen Bo Carter and Washboard Pete (a zippy, zestful Christmas Blues) and The Reverend J.M. Gates (the hellfire sermon Did You Spend Christmas Day In Jail?), and Harry Grafton's regretful tale Bring That Cadillac Back. Some famous names get in on the act too, of course - Louis Armstrong with Zat You, Santa Claus, The Moonglows with Hey Santa Claus, jazz vocalist Joan Shaw with I Want A Man For Christmas, and T-Bone Walker with Cold Cold Feeling. Not to mention country star George Jones' Eskimo Pie, which only just scrapes into the "cold climate romance" category for the season. But Percy Sledge doesn't make an appearance… That may be because the timespan for the selections on the disc is 1948-1961 (which we learn from the discographical notes).

I feel sure yule have a great time with this 77-minute comp - but if it ain't enough to jingle your bells, then bah humbug to you!

I WANT A HIPPOPOTAMUS FOR CHRISTMAS - Gayla Peevey