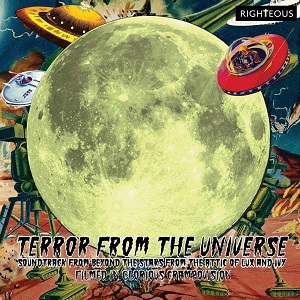 Various Artists
Album: Terror From The Universe: Soundtrack From Beyond The Stars From The Attic Of Lux & Ivy
Label: Righteous
Tracks: 4 (26)
Website: http://www.cherryred.co.uk


This is a real curio, even by the standards of previous releases in the continuing "from the attic of Lux and Ivy" series. These have all taken the form of unashamed multi-artist compilations of wilfully obscure and seriously unforgettable gems from the archives (read record collections) of Cramps folks Lux and Ivy. Great for dipping into, or bookmarking and selecting favourites for compulsive repeated play. I've made many really treasurable discoveries that way. But this new excursion into the archives is presented rather differently, even though it contains several familiar components. In one way, it's rather like exhuming a buried time-capsule filled with pop-cultural artefacts - but these are presented in the context of musical interludes within a commentary or verité news item or dialogue from a choice B-movie. This is great as a one-off (or maybe two-off) auditory experience, but the drawback is that the music is segued in and out, sometimes slightly edited, and no single item is separately banded which makes relocating a specific item for future play nigh impossible. The disc's generous 73 minutes is sub-divided into four discrete "sequences", so an approximation of cue points is possible with care but it's not easy. And sadly, discographical information is unusually minimal, almost non-existent: black (hole) mark there!

The overall impact is akin to a hallucinatory sensory experience like sitting in a darkened movie-house and just letting it wash over and through you - great if you're in the mood, but mildly frustrating if you want to relive a favourite track. And there are some real pearls here - Les Paul's How High The Moon and Jamie Horton's cover of Robot Man, for instance - while the whole set closes rather aptly with Skeeter Davis' classic yearning ballad End Of The World. Between, the musical range is wider than just teen-pop and schlock, with contributions from Sun Ra & His Arkestra, Moondog, Ron Goodwin and the theremin-soaked creations of Dr. Samuel J. Hoffman, also extracts from some early concept-albums (typically queasy "easy-listening") from the likes of Frank Comstock and Les Baxter. Intermittently fascinating, and yes possibly musically uneven, but certainly worth the punt.

Terror From The Universe: Soundtrack From Beyond The Stars