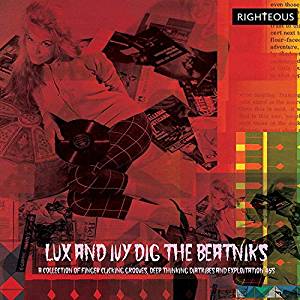 
Catchily subtitled "A collection of finger clicking grooves, deep thinking diatribes and exploitation 45s", this is (unless I've miscounted) the sixth in the series of glorious comps on which Lux & Ivy of The Cramps raid their personal archives to share with us a whole host of unlikely treasures, many of the "so bad they're good" variety but also containing some wilfully obscure gems that you can't resist replaying. For the beatnik scene produced some of the craziest moments ever to be cut into vinyl - existential theorising went hand in glove with blatant cash-in hep-cat plagiarism and cheap parody, bandwagons were for jumping on, and thus exploitation was never far away as rationale flew straight out of the window. Customised jive, tosh and tomfoolery in abundance.

So you might kindof expect to encounter titles like But I Was Cool, Beatnik's Wish, Meet The Bongo Man, Professor Bop, Flipsville and Cool Yule, but then we might be stretchin' on out into the realms of pure silliness with the likes of The Goatee's Gotta Go, the mock-cautionary Tempest In A Teapot, and the enigmatic What Is A Fisterris?… (and yeah, what is it?!!). And then there's even more enticing track titles like William Butler Yeats On The Third Avenue EI and The Murder Of Two Men By A Young Kid Wearing Lemon Colored Gloves! Schlock-horror meets cool on Johnny Beeman's demented Laffin' Beatnik and Sylvester Statuslack Hup's surreal, voyeuristic, grotesque, almost Zappa-esque beat-freak party portrait Theme From The Pad. Beat icon Slim Galliard contributes a couple of gems of beat-speak wordsmithery (Yip Roc Heresy and You Goofed). The dance crazes were legion too - for instance, what kind of picture does Wombat Twist conjure up? Or the beatnik-ceilidh of Square Dance For Round Cats? Priceless!!

But none of these can compete with one-word triumphs like Blah by Sidney & The Chimps, or the informatively titled Dog (by Bob Dorough), which voices its sentiments in dog-speak (I kid you not!). Beat psychoanalysis rears its head with Yeh-Yeh soundalike Twisted and the doleful Lonesome Boy Blue. And there's even a track by '40s funsters Spike Jones & His City Slickers, Pimples & Braces (presumably recorded very late in their career), which strings together pairs of hip words to a beat-bop backdrop. There's some serious beat be-bopping from jazzers Dizzy Gillespie (the manic chaotic nonsense of Oop-Pop-A-Da) and Roy Eldridge (The Gasser); a swaggersome, blowsy big-band number Beatnik from Bob Mersey and a fab Mamboblues; while I just lurve the muppetty coo-ing of the Russ Haddock Trio's Bohemian Girl.

Sure, the set's not without its share of makeweights and "why bother?" entries - for instance there's rather too many of those knowingly pastiche jive-speak recitations (once you've heard one beat-fairytale of the ilk of Like Rumpelstiltskin you've heard 'em all, and the novelty soon wears off), but to compensate there's still plenty of cool cuts of the "hey man, you just gotta hear this one" category. Maybe there's a feeling that the best of this set could've been pruned down to make a shattering single-disc comp tho'. And I still lament the lack of recording date information for these selections (even tho' publishing and compositional credits are included). Nevertheless, I still eagerly look forward to each new Lux & Ivy comp - and there's another one on the way in time for Hallowe'en!