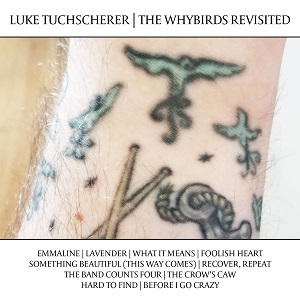 
As a working musician, with the extra time on your hands during lockdown, how can you undertake a project that both stimulates you creatively and gives fans of your music a treat? For Luke Tuchscherer one response is to sharpen up his recording and mixing skills by revisiting some of his old Whybirds' songs and give the listener a chance to enjoy alternative solo performances of a clutch of his material previously issued in a band context.

The ten tacks presented here, all written, played, recorded, mixed and mastered by Tuchscherer alone, come in a stripped-down form, as they were first written, with just vocals, guitar and harmonica. Available only on Bandcamp, Luke explains "I didn't want this to be a proper release, what with all the admin and stress, I just wanted to put something on Bandcamp for fans of mine and the band." Don't be tempted to think, however, that this implies any lessening of standards. The release gives a fascinating appreciation of, and alternative take on, some old favourites, whilst at the same time making for a thoroughly enjoyable listen.

Formed in 2006, Bedford-based alt-country rock band The Whybirds followed a career which saw them gain great critical acclaim, both for their live performances and releases, their second full-length album, 2010's "Cold Blue Sky", garnering particular praise. Noteworthy for the fact that all four members shared both lead vocal and song-writing credits, downsizing to a trio following an amicable split in 2012, saw the release in 2013 of "A Little Blood", a much darker, grittier album in 2013. In addition to these albums, their legacy also comprises an E.P.,"Tonight", their debut, eponymous full-length release, (both 2007), 2011's "Live Recordings Vol 1" and 2013's very limited-edition release "Bird Seeds". Critical acclaim alone, however, does not pay the bills, and the group played their farewell gig in 2017.

The first three tracks on this collection share a common feature in that although they are all songs of his, as indeed are all those presented here, he didn't sing them on the original recorded versions. As he comments, "Back in the early days of the group, it was decided - not really by me I might add! - that a singing drummer might look a bit weird, so other members sang a few of my songs. Thus Dave Banks sings 'Emmaline' and 'Lavender' on the "Tonight" E.P.

'Emmaline', originally delivered with chunky electric guitar sounds, now laid bare with an insistent chugging accoustic is a cracking opener here, its melody and depth of tone revealed in a version that brings to mind Roy Orbison. 'Lavender', one of Luke's first proper songs, was actually a number performed by The View, the pre-Whybirds band formed at school with Ben Haswell and Taff Thatcher, but even that band had a singer, Alex Small, so this recording sees him singing it for the first time in nearly 20 years.

'What it Means', from the band's self-titled debut, was originally written in G, but on the album Ben sang it in C. On this version Luke finds a middle ground and plays it in Bb. Gone are the swirling keys provided by producer, and later band member, Nick Malling, on what was a full-on rocker, as here Luke reveals what an accomplished song-writer he is, together with also showing the power and precision that can be achieved with just voice, acoustic guitar and occasional harmonica.

'Something Beautiful (This Way Comes)' is indeed beautiful. A song addressing hopes, dreams and promises, it was written about the band, and how leading up to Cold Blue Sky, with their upward trajectory and aforementioned critical acclaim it seemed like the fabled pot of gold at the end of the rainbow was about to come into their grasp.
'We're heading to the promised land, I can feel it in my bones
Something beautiful this way comes'
The dreams were dashed though, and for Luke the song lost a bit of its lustre over the years. Fast forward, however, and following a recording project undertaken in New York City, which in essence ended up being a bit of nightmare, and one positive thing gleaned from that experience was that the most requested song, by far, was 'Something Beautiful'. This caused him to reappraise the song, and he finally saw it for what it was - a song about hope. "Now I don't think of the band when I sing it. I think about what it means to other people." Assuredly delivered here, redolent of an unplugged Neil Young, this really is a finely-crafted song.

'Recover, Repeat' and 'Before I Go Crazy' were both songs from Live Recordings Vol. 1 that were never released elsewhere, so seem good choices to be given an airing. The latter comes as the fitting final track and the plaintive vocal delivery of the former perfectly conveys the hope and optimism of the lyrics
'Somebody's out there, somebody's waiting, waiting for me
Someday, someday, I will feel loved'
Whilst the harmonica of this stripped back version suggests more Nebraska-era Springsteen than the full-on "The Wild, The Innocent & The E Street Shuffle" sound of the original, again the song-writing prowess comes to the fore. 'Buddy hold on' indeed.

'The Band Counts Four' appears here in its original ballad form. In great contrast to the previous recording's organ-infused soulful groove on A Little Blood, this version is a slower, much more mournful and melancholic take. A gorgeously emotive journey.
'I won't let this one slip away, We've come too far to turn back again now,
Cos I know when it's all on the line, the band counts four, and everything's alright'
Similarly, the rocked-up version of 'The Crow's Caw', appearing on the same album, and which to these ears emulated ZZ Top, here is pared to a spartan finger-picked style that brings to mind Townes Van Zandt.

'Hard to Find', written when he was 21 at university, has almost become Luke's signature song. In many ways acting as a template for many of the themes that he would write about in the years to come, coming to terms with lost dreams, trying to find love, and trying to find a place in the world, it has proved to be a prescient piece of writing that certainly lingers long in the consciousness following listening to this latest version.

In an interview, Luke once said that The Whybirds were just about playing acoustic songs loudly on electric guitars, so being given the opportunity to listen to some of their numbers being played, simply, 'as conceived' is to be welcomed. As for the intended audience? Certainly fans of The Whybirds should find these tracks a fascinating insight, but I would also suggest that a much wider audience will be equally enthralled. Anyone with a liking for quality song-writing and delivery, in the mould of Ryan Adams, Steve Earle, together with other artists mentioned above, should give this a listen. Luke really does possess a voice of the highest calibre and these ten tracks make for a fine listen.