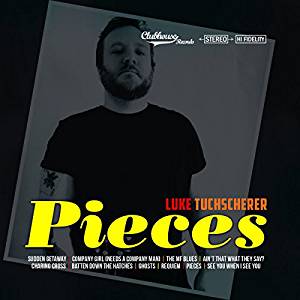 It announces its intentions from the start with the moody Neil Young influences of the make a break 'Sudden Getaway', threading a strong melody through the electric guitar waves, moving on to the riff-driven, keys-backed lyrically acerbic 'Company Girl (Needs A Company Man)' with its tumbling chords hints of Tom Petty.

However, it hits a brick wall with 'The MF Blues', a dirty riffing blues boogie that sings in the lyrics what the title's too timid to spell out. Here Tuchscherer seems to be intent on channelling Jim Morrison, but while he may have musical chameleon abilities elsewhere, he's patently no Lizard King.

A blue collar lament for the working stiff, 'Ain't That What They Say?' helps to haul it back out of the well, his phrasing here suggesting he might have some old Smiths albums in the collection too, the swerve into the stripped back, scarred heart apology ballad 'Charing Cross' pulling it the rest of the way. It's back to chugging heartland guitar rock with the Springsteen-tinged 'Batten Down The Hatches' (a song guessingly written in the run up to last year's Presidential elections), the Boss's influence hanging around for the 'Brilliant Disguise' shades of 'Ghosts ' with its sha na na na na refrain and a reflective lyric about moving on, loss, change, regrets and how we're always part of where we've come from.

The politically powerful seven-minute 'Requiem 'takes it back to Young with its theme of economic inequality ("all for ourselves and none for other people") and corporate oppression (the lyrics even reference privatising the NHS) with a slow burn, growling groove and a heady firestorm of Crazy Horse guitars burning things up midway.

The penultimate 'Pieces' is a roots rock swayalong that takes a somewhat pessimistic view of humankind ("love is rare, instinct is criminal") before, in a parallel to American Aquarium's 'When We Were Younger Men', 'See You When I See You' is a fond farewell and eulogy to his former bandmates in The Whybirds, a proud declaration that "none of us sold out nor wished that we did." The band may be no more, but as this album amply demonstrates, Tuchscherer's integrity remains undiminished.