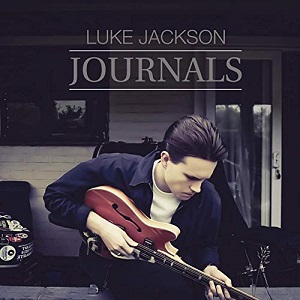 
Regular readers of Fatea will know I get really nervous around brilliant albums. I delay the reviews longer than I perhaps should. It's not that I don't want to share a special secret it's more that I don't want to ruin a great release with hyperbole. We've all been there, friends have talked about a film, tv series, album with a real passion, praising it to the heavens and then when we get to it we have expectations that it can't possibly live up to, or can it?

Hyperbole can turn the great into the ok, it can mean it takes longer than it should to truly acknowledge acts of genius. A debut album is fresh as a daisy, but "Journals" is Luke Jackson's fifth album and he's still only twenty five. Surely he's got to come off the rising tide soon, hit his Apple iPhone 11 moment? Well if he must, this ain't it.

I've been really lucky to have followed Luke Jackson from very close to the start, before his Martyn Joseph produced debut album "More Than Boys". I said at the time that Luke was writing with a depth and maturity that he had no right to. Yes there were the rights of passage songs, there still are, but there were also the songs about leaving loved ones behind and going off to war, songs that showcased a singer-songwriter with a massive emotional quotient. We're now a few more years down the line and Jackson has had the opportunity to live some of his imaginings of course this is going to be good, going to be able to take the pressure of the praise that will naturally go it's way.

It's first and foremost "Journals a band album featuring regular collaborators Andy Sharps and Elliott Norris, as well as Lizzie White(vocals), Jarrod Piner and Dan Lucas, both on keys, with Dan also co-producing, but as you would expect the songs also work blindingly well as solo pieces.

Luke penned eleven of the twelve tracks on the album, but let me deal with the cover first as it's a real statement of intent. Sandy Denny's signature "Who Knows Where The Time Goes" has been recorded many times before. Most of those recordings have been from female vocalists, but there have been a few by blokes. More important it puts Luke out there against a standard to be judged, against a reference point that his new listeners can define and against that mark, Luke definitely makes his own.

I alluded earlier to Luke Jackson's songwriting, he is older and wiser, his perspective changes, but he can always find the right words, melody, tune to ensure that he can turn those thoughts and feelings into something that matters regardless of whether it's something in his own life, or something that he has come across that has moved him. I won't do a song by song critique, I'll leave you to discover and explore them yourselves, my only hint is to give yourself time to play them over again.

Luke Jackson remains that rare artist who continues to step up album by album, but does so in a way that references his earlier works so that you know they still matter. "Journals" is nothing short of sensational and creates a brand new bar that Luke will be judged against. No wonder it's already making waves.