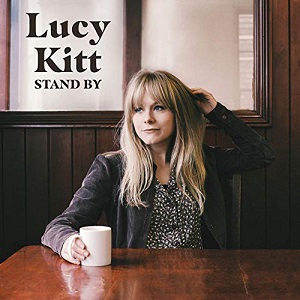 
Well I kinda thought Lucy's name was familiar, but I couldn't place her. Then while going through some old press releases I found her name listed as a semi-finalist at the 2006 BBC Young Folk Awards. In which case, I thought, where's she been since then? Is this the same Lucy Kitt? Well it turns out it is - and she's been honing her craft on the live scene ever since, with support slots galore for luminaries such as The Unthanks and Cara Dillon, appearances at major festivals, and a large number of internet radio sessions. But inexplicably, not under my own radar! And 12 years sure is a long time for me to have been missing out!

Lucy hails from Upminster, Essex, and from an early age was inspired by her guitar-playing father, although she then served her time in the riot girl grunge band Ostara which she formed at age 16! At Uni at Canterbury, she developed a love of folk and acoustic music and became a habituée of that city's music scene, leading to the aforementioned award placing in the new role of singer-songwriter. But interestingly, Lucy's music can be heard to have more in kinship with the sound of the '70s LA/Laurel Canyon scene than with the angst-ridden contemporary indie or traditional folk scenes. Her writing is characterised by a deceptive simplicity of expression and execution, and Stand By - which, incredibly, is her debut full-length record (otherwise there's only been a 2012 EP, Where I Belong, just one song from which is reworked for the album) - delivers a perfect encapsulation of her fully-formed and confident technique in the space of just half an hour.

Recorded in honest-to-goodness analogue with only three extra musician friends (Treetop Flyers' Sam Beer, with Dave Holmes and Pat Kenneally) for occasional company, Stand By's ten songs are down-to-earth, companionably heartfelt accounts of her personal experiences that nevertheless bear the hallmarks of self-awareness and intelligent reflection; it turns out they were mostly written during her studies at Canterbury. Well ok, love, loss, learning and longing figure large, but don't let that fool you since Lucy's thoughts and feelings are expressed in a refreshingly unformulaic way, with a wistful melancholy informing her mature and sanguinely positive attitude to events. Her songs also benefit from a distinctive and attractive musical styling that centres on subtle yet memorably melodic guitar phrases and catchy rhythmic patterns. It's a classic, simple sound that straddles folk and Americana, and the album's opening title track and the (I think, almost self-deprecating) Little Country Song both provide good examples of the kind of earworm that will stick around long past the span of this CD. As a performer too, Lucy's assured, gently captivating voice is ideally complemented by her playing style, and it seems she can do no wrong; but on the other hand, to tag the album unpretentious and entirely likeable would be selling it very short.

Again, though, I ask why it's taken so long for Lucy to make it onto record?…