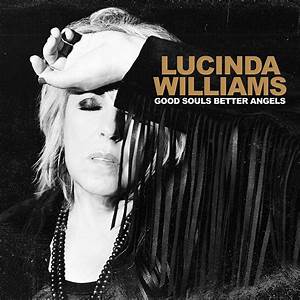 
This gruff and gritty, rough and tough, politically-charged 12-track album - with trademark shards of tenderness and hope - muscles and hustles its way in to the already-impressive Lucinda Williams' catalogue stretching back some 40 years.

It is timely and offers a base for plenty of discussion as she rails against the unfairness life stirs up, a bombardment of global dangers, domestic abuse, family heartaches, tapping all the while into her love of Robert Johnson songs and Delta blues' power to marvellous effect.

Produced in Nashville by Ray (Car Wheels On A Gravel Road co-producer) Kennedy, her 15th album is strengthened infinitely by the quality co-writing that the triple Grammy-Award winner has enjoyed with husband/manager, Tom Overby. This is something she "always dreamed of - a relationship with someone I could create with."

We're not taken back to her childhood this time round as Williams is focused on tackling in song a world she sees as falling apart. Typically, she never writes obliquely or without candour: the difficulties are confronted, the guilty lambasted - the US president gets a mauling in Man Without A Soul.

Yet, unsurprisingly, the hard-times' songs are stamped with her own brand of real regret plus a never-far-from-the-surface dream of things getting better, as stoutly declared on the gorgeous groove of When The Way Gets Dark: "Don't give up / you have a reason to carry on."

With touring band Stuart Mathis (guitar), David Sutton (bass) and Butch Norton on drums it was inevitable the album would sound live and each player gets plenty of space to excel, complementing Williams' ragged and dusty vocals that seem to be swept into place at all the right moments.

Bad News Blues and Bone Of Contention swagger like hell but switch to Pray The Devil and you'll encounter a track shrouded by a Nick Cave And The Bad Seeds' brooding vibe shattered only by Mathis' fiery guitar.

Williams tackles depression on Big Black Train. The pace drops, her voice cracks like she's not going to reach the end of the verse and her intuitive band cushion her pain. Melancholy is commandeered gloriously again on Shadows And Doubts, which addresses the growing pitfalls of social media engagement.

The lady from Louisiana expertly navigates the album with verve, subtlety and a glow all of her own yielding potent, gutsy outbursts and signature, low-key, affecting tracks like the final song, Good Souls, where she implores: "Keep me with all of those / who help me find strength / when I'm feeling hopeless / who guide me along / and help me stay strong and fearless." Strong and fearless is a description that fits Lucinda Williams perfectly on this raw and vivid collection.