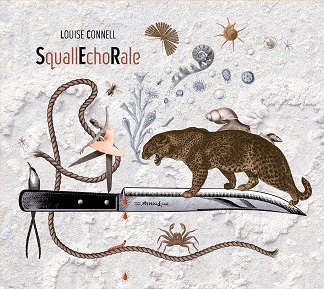 
Previously known as Reverieme, under which name she recorded 2016's Straw Woman, the Scots singer-songwriter returned with an album that gathers together the 18 tracks from the three individual EPs of the title, throwing in an all new full band recording of mother to child song 'Ten Feet Tall' which opens proceedings, with the original, more plinckety '10ft Tall' as the last track.

In-between, the tracks aren't sequenced in EP order but scattered around, the second up being 'Rope' off Echo which comes with Brill Building girl group piano cascades, 60s' psych rock raga guitar lines and a pop sensibility that strikes as somewhat at odds with lines like "I'm forging quite a career in suppression." But then Connell's lyrics aren't exactly disposable singalongs, 'We Night' another mother/child number, the strummed, cello-accompanied gently swaying 'Ilo' a love song on which she declares "we are total embryonic potential/And budding kinesis" while pizzicato strings melt like ice down the words of Fruit as she sings "I'm a crooked, wizened/Pile of old dreams/That shift all around/Shooting down my nerves from/An old mind /To the muscles in an old hand."

Clearly not an album to put on as background noise, this demands you forage in its undergrowth of imagery, metaphors and similes to tease out the meanings of lyrics like "Little girls have smiles long as guts/Hairs that catch the light and glister like blood" and "where's the girl who swallows lies, And coughs them up as smiles? but she always ensures the music makes the task easy on the ear, whether bouncing along on the jaunty ukulele coloured stomp of 'Crossed The Line' ("I could have been a genius/But I crushed the brains out of my skull/I could have been a lover/But soft love would make my skin crawl"), the chamber folk 'My Wandering Mind', the reverb guitars of 'Get To Know Me' (a variation on the suitor calls on his sweetheart's father to win his favour tradition) or the old school Americana waltztime 'Most Righteous People'.

Be it shimmering to theramin on the carnival whirligig 'Where I'm From', rocking along to the pounding drums and new wave guitars of 'Viscous Fear' or stripping it down on the kittenishly warbled acoustic 'Did I Save The Day' where she sounds a touch like Dolores O'Riordan, there's never a moment when she loses your attention.

If you already have the EPs, the new track can be downloaded on its own, if you haven't then this is a triple treasure chest of discovery in one bundle of delight.