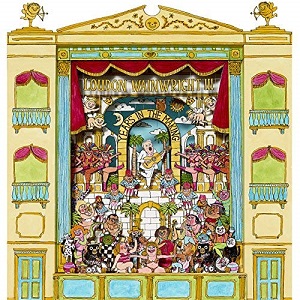 
Having turned 71 last year, Wainwright has been doing a little housecleaning in the archives, the result being this sprawling collection of previously unreleased, often private home recordings dating back to 1972, although not all of them are songs and the sound quality is often variable, accompanied with a booklet details in the tracks, who plays on them, when they were recorded along with assorted drawings, handwritten notes and other memorabilia.

Disc 1 opens with a recent unaccompanied 38-second recording of the old folk blues Rosin The Bow specifically for the set, a song he declares to have been the catalyst for his chosen career and his mom and aunt responded approvingly to his 7-year-old performance.

The collection features two 1974 home recordings with ex-wife Kate McGarrigle at the start of their romance, 'You Ain't Going Nowhere' and his own 'Unrequited to the Nth Degree', the same year and location also offering up Steve Goodman's 'East St'Louis Tweedle Dee' with Goodman on vocals and guitar. Another raw home recording, this time from 1972, is a soft voiced version of Guthrie's 'Philadelphia Lawyer', George Gerdes on harmonica and harmonies.

Trawling through the first disc throws up a laptop recording of the old folk chestnut 'Stewball', a 2008 studio recording of 'Roll In My Sweet Baby's Arms' featuring Chaim Tannenbaum and David Mansfield, live fan bootlegs of 'Love Gifts' (1981) and a 71-second 'Have You Ever Been To Pittsburgh?' (1978), another surfacing with a 1998 'Thank You Mr. Hubble' from 1998. Also sourced from a live recordings come a Band-like '2 Song Set' and talking blues 'Smokey Joe's Café' both from My Father's Place in 1977 and backed by Slow Train, a 1993 Bottom Line take on 'Cardboard Boxes' with Mansfield and Tannenbaum, Out Of This World' and a poignant 'Your Mother & I' with Bill Frisell on guitar and Greg Leisz on pedal steel, the former also featuring Van Dyke Parks on piano, both from Germany in 2003 and, on disc 2, a low fi 'Ulcer' from 1987 and, recorded in Edinburgh in 1984, a funky take on 'No', There's also a 2001 Chicago recording of 'IDTTYWLM' on which a guitar string breaks midway, two from McCabe's in 2007, 'Valley Morning' and a fine cover of Richard Thompson's 'Down Where The Drunkards Roll' with Leisz on mandolin and Steel, respectively. A particular treat comes from 2017 in the shape of 'Meet The Wainwrights', a Cayamo cruise recording featuring Sloan Wainwright, Rufus Wainwright, Martha Wainwright, Suzzy Roche, and Lucy Wainwright Roche and written in 2015 for The Wainwright Family Alaskan Adventure.

There's a whole bunch of studio or home studio tracks, among them a 1972 live in the studio 'You Hurt Me Mantra' with White Cloud, featuring Thomas Jefferson Kaye and Hugh McCracken, and, in the same setting but from 2017, 'It Ain't Gaza', a number putting a domestic spat into perspective. Plus, there's a funky blues, tribal stomp 'I Wanna Be On TV' from 1982, a solo 'Things' from 2004, written for Lucy, the same year offering the waltzing 'Rowena', another to feature Frisell and Leisz and based on courting letters written in 1918 from his mother's father to her mother, Rowena Long, 1975's 'Hollywood Hopeful', 'God's Got A Shit List' from 2007 and, a self-celebration of his 71st, 'Birthday Boy', sung a capella with hambone slaps.

There's another of his birthday recordings over on disc 1, a cute home memento from 1986 with the kids Rufus, Martha and Lucy singing 'Birthday Poem' (written by Suzzy Roch), 'Happy Birthday' and Loudon's 'Animal Song'. The 'Kids 'section of that disc also features three further laptop recordings, the ukulele-accompanied 'Button Nose' and 'Teenager's Lament' both about youngest daughter Lexie, the former for her as a baby, the latter from her own sulky adolescent perspective. She also gets to sing with her dad on the 1999 children's story waltzer 'The Ballad of Famous & Harper'.

My way of an amusing total throwaway, taken from a Danish radio interview with Liza Minelli in 1979, the presenter plays a clip of Wainwright singing about her Oscar, claiming to be her ex-chauffeur, prompting her to remark "he wasn't the chauffeur, he was one of the kids next door."

Primarily one for the most dedicated of completists, but there's some real treats here.

I Knew Your Mother