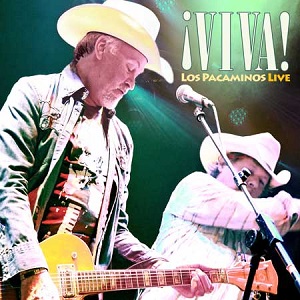 
Mid-1992, and former Q Tips vocalist, and more recently 'pop star', Paul Young called up some musician friends with the sole intention of having some fun playing Texas and Mexican Conjunto, or 'Tejano' music. At that time it could not be envisaged that 26 years later this ad-hoc band would have evolved into a permanent, serious project, still performing, and releasing, vibrant music of the best quality.

¡VIVA!, their latest release was recorded live at The Warehouse, Harrogate previously unknown to me as a hotbed of Southwest American music, in September 2017, and what a formidably entertaining album it is too.

Lest it be thought that the group is merely Paul Young's Band, it would be apposite to correct that potential fallacy. This is a tight band, comprising in-demand musicians of the highest calibre, all contributing greatly to the overall sound, and, as is clear on this album, showmanship that sets Los Pacaminos apart.

From the opening sirens of Highway Patrol, co-incidentally one of my favourite Junior Brown tracks, this 'group ethos' is apparent, with accordion, guitars and pedal steel swirling around vocals, no spotlight here on a 'main man'. The closing whoops of appreciation from the audience give the impression that this was a special night, and judging from the music which follows that would seem to be more than a fair claim.

Song choices on the album comprise a mixture 'classics' and band-composed, and include live versions of tracks from previous releases together with others that don't seem to have appeared on earlier recordings by the group. The running order is another positive attribute, with variations in tempo, mood and atmosphere ensuring great variety and creating an ebb and flow which maintains interest for the listener.

Poor Boys and My My My from The Early Years, the former always fondly reminding me of Dr Hook, both get an airing, whilst, as you might expect, Fistful Of Statins is also well-represented, with the highly infectious Girl From Tennessee, Caballero, Come A Little Bit Closer and a woozy rendition of Battered And Broozed also making the final cut.

A cameo guest appearance from Chris Difford, an honorary Pac, is worth the entry fee alone, as Take Me I'm Yours gets a Texmex makeover, Tex Me I'm Yours indeed, complete with stellar pedal steel from Melvin Duffy.

With cracking versions of classics such as Travis & Williams' Smoke That Cigarette, Doug Sahm's A Little Bit Is Better Than Nada, Allison & Allison's He'll Have To Go, Little Sister by Doc Pomus and Mort Shuman and John Mellencamp's Teardrops Will Fall, not only are dues paid, but, perhaps more significantly, the arrangements and interpretations/re-workings serve to exemplify the sheer musical talent alluded to above.

The overriding feature that one is left with after listening to this collection, however, is one of utter euphoria.

As I write on a dull, dreary, November morning, any early-winter blues are dispelled by the happiness and celebration of life exuded by the music on offer. It is the sort of album which leaves you beaming from ear to ear and with an incessant urge to leave your seat, get up and dance.

To unashamedly borrow, somewhat incongruously perhaps, from Sum41, ¡VIVA! is 'all killer and no filler'.