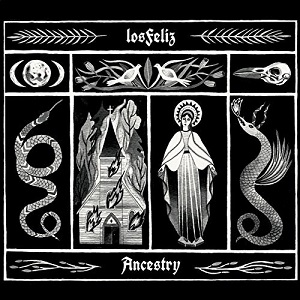 
LosFeliz is the pseudonym of Brighton-based high priestess of alt-folk Lucy Powell, and here on her debut release "Ancestry" she has recorded and written an album crammed full of mystery, wonder, light, shade and at times a little foreboding, but ultimately the end result is one of uniqueness born of a singular vision and an adventurously creative overview to produce a piece of work that transcends the 'normal', whatever that is!

Bizarrely, (but as it turns out inspirationally), recorded in a rural chapel on the Brecon Beacons that her ancestors built, and surrounded by the graves of her predecessors, LosFeliz eschews the formulaic nature of the song-beast and seemingly at will weaves intricate patterns across a soundscape that although sparse, and thus self-nurturing, always appears enough to satisfy.

So what we have in essence is the ethereal voice of LosFeliz spanning the compositions, and dominating - but in a way that touches gently at the edges of fragility one moment, then soars high into the ether of octave ranges where few confidently go. Her voice is at once beguiling, tender, and then conversely strident and harsh. And therein lies her secret - a chameleon-like tone that envelopes the songs in a warm loving embrace without overbearing or crass dominance.

Set against singular, seductively alluring (and angularly skilful) guitar work that follows Lucy's voice but never intrudes, songs (or rather should I call them moods?) like "Foreign Lands" and "Moreso Today" take on an almost monastic tone, and given where the album was recorded I'm guessing that's half the point. So where voice goes, guitar is never far behind it following in the wake of vocal resonance, both urging each other further toward occasional dissonance but more often than not a heavenly conjunction that hits just the right spot.

Titles like "Jupiter", "Dove", "Orion" and "Temple" all tell their own story, and if the album has a quasi-religious feel to it then I'm sure that's purely intentional as the lyrics themselves touch on themes that are rooted in the creation of existence and the personal path through that existence to another place, and maybe even time. And with that in mind, the lyrical and musical alliance is a sound pairing.

Lewes-based independent record label Union Music have pulled off yet another coup to add this new release to their already impressive back catalogue of quality recordings from the likes of Jamie Freeman, Hatful Of Rain, Police Dog Hogan and Noble Jacks, and "Ancestry" will strengthen that core value further. LosFeliz have given the world an album that will light up the darkest days and give emotional comfort to those in need - music that will change with your ever-changing moods, music that will move with you and mean different things, to different people at different times. In short, this may not be what you expect, and hell, that's a good as reason as any to dip a toe into the wonderful and slightly off-kilter world of "Ancestry".