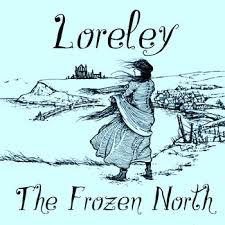 
After the success of their EP, Two Blind Mice, and their debut album, Fortified, Loreley are back with their second full length album. 2016 was a successful year for the duo featuring a mini-tour supporting Reg Meuross, BBC radio interviews, and even award wins (Best duo - Graham Steel Music Awards). This is a duo whose star is certainly on the ascendancy.

The aim of Loreley is to explore archives of mostly-forgotten folk songs and breathe new life into them, giving them new melodies to bring them into the modern era. To that end, The Frozen North features medieval poetry, a winter ballad, and even a shanty dated to the Barbary Wars of the 18th and 19th Centuries. While some of these songs are somewhat recognisable (including a frantic version of Ilkley Moor Bahtat), most of these are unlikely to ring many bells, such was the obscurity from which they were recovered.

The songs are simply presented, with very little embellishment, giving the album the feel of a live performance. Simon James Chisolm takes on most of the compositions, and provides much of the instrument work, playing mandolin, guitar, dulcitar and concertina at various points on the songs. It is fast paced at times, and Maddy Glenn's vocal performance to keep up is impressive. If occasionally the lyrics get a little lost, they lose little of their impact.

There are some strong songs on offer here, not least with the opening track, Blow Northerne Wind, taken from one of the oldest surviving English poems. It's one of the more recognisable pieces, having been performed regularly since being published by Oxford University in 1900, but Loreley's version is guaranteed not to leave your head. Ilkley Moor Bahtat will be familiar to most, but you won't have heard a version like this before. It zips along faster than Usain Bolt at the Olympics, and how Glenn doesn't trip on the words is a mystery.

Steve Knightley referred to Lorely as "traditional-medieval-punk-folk", and that seems as perfect a fit as any. Relentless at times, but always energising, this is surprisingly innovative considering the age of the source material. The Frozen North is released at the end of March, and is well worth checking out.