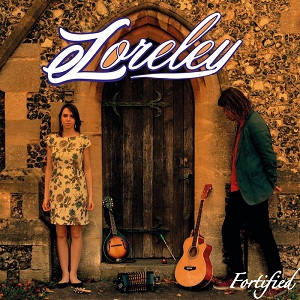 
Loreley is a relatively new duo on the scene; they started out in Reading towards the end of 2014 and just last autumn relocated to Sheffield. Maddy Glenn and Simon James Chisholm first came together, through a shared love of folk music, while studying at Reading University, but they only decided on their vision for Loreley after a chance encounter with the Full English project. And that's where it gets interesting! The stage-name Loreley is apt, for it's a familiar word to students of folklore (Lorelei being the maiden on the rock of that name who lures fishermen to their death with her song) and yet here it's spelt just a little differently, with a twist in the tale if you like. Taking that analogy further, into the duo's music, their self-imposed brief is to perform (largely familiar) traditional songs yet to brand new self-composed melodies - "reimagining these folk songs for the modern age".

OK, you say, we've heard that claim before … yeah, and often; but in Loreley's case what we get on the majority of songs really is something very much different - and frequently disturbingly so, especially at first acquaintance. Perhaps I'd best describe it as a dark, skewed exploration of tradition with a spirit of true devil-may-care adventure and a genuine desire to communicate the songs - which they do with an acute sense of the dramatic. Their new melodies can be invigorating, surprising, challenging, maybe confusing, often decidedly strange and unsettling, sometimes even jarring, but invariably confounding expectations and both positively inviting and enabling the listener to hear the lyrics anew. It may be thought that, given the weight of tradition and the extreme familiarity of the "usual" tunes, it's unlikely that these new tunes will "catch on" and be assimilated into tradition even as alternatives; it's true that they don't always pass the "immediate recallability" test, but in any case I don't regard this as a barrier. On occasions the "fresh tune" will appear deliberately provocative, purposely misaligned and dragged out of kilter - as on The Farmer's Boy (taken at a breakneck pace), The Blacksmith's Courtship (a weird cross between medieval/madrigal and folk-punk) and the shanty Blood Red Roses (which is given an extraordinary modal transformation). I love the way Loreley seen sometimes to be deliberately stripping the beauty out of the original melody, as on The Banks Of Allan Water and Loch Lomond - but it really works. At other times (e.g. Wraggle Taggle Gypsies) the tunes are partially or almost recognisable, but then in a spirit of almost punk disobedience they get distorted, contorted into discordance (but deliciously so!!).

There may also be occasions when the trademark Loreley white-heat energy and quite frantic charge of delivery threatens to spiral out of control into a train wreck, but miraculously they always manage to steer it through together and keep on track. And Maddy and Simon, while possessing this important capability, also prove complementary as individual musicians; Maddy takes the lead vocal role, with Simon providing harmonies where appropriate, while instrumentally it's Simon who takes the lion's share of the soundscape, playing mandolin or guitar (or on one track, concertina), with Maddy filling in on occasional percussion, tin whistle or recorder. There can be a nicely thrashy feel to Simon's playing, but it's refreshing and very much "of the moment"; having said that, he can also do more delicate expression too, as on Roslyn Castle and his purely instrumental take on Poor Wayfaring Stranger. The latter track is one of the few items that quite closely adhere to the usually-accepted tune - another is a fine a cappella duet take on Brigg Fair.

Fortified proves another apt word, then, since Loreley's approach and performing style, so persuasively advocated on their 2015 debut release (the EP Two Blind Mice) now reaches a full fruition - and a "fortified", confidently consolidated state - on this full-length album. It was released towards the end of 2015, but didn't reach my desk until almost a year later. But I'd consider it essential hearing now, in order to give you time to catch up and accustom yourself to the Loreley vibe, their distinctively quirky modus operandi and sound, before the impending release of Fortified's followup album The Frozen North (towards the end of March 2017). I really like the forthright, in-yer-face clarity of execution and recording on this album too, and even though I can appreciate that some listeners may find it a touch relentless at times I personally find Loreley's performance intensely stimulating. I'd also commend Loreley's attention to detail in providing satisfyingly informative background notes.