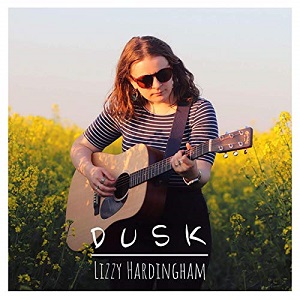 
I first heard Hertfordshire musician Lizzy Hardingham when "Harvester of Gold" featured in Fatea's "Explore" Showcase (Summer 2019). One of the star tracks from that Showcase, it also starts off the "Dusk" album and immediately nails down Hardingham's place as one of the rising stars of the UK folk scene. Her voice is always crystal clear. It carries the emotional power to deliver folk ballads like "McClennon Babies" and compels the listener to take in the whole story behind the song. Whether delivering contemporary or traditional songs, it takes real skill to turn great stories into great songs.

After a number of listens, "Jesuit Barrels" has become my personal highlight song. That's partly because of the change of mood brought in by the addition of some terrific background banjo playing, partly because it tells the story of the 12 men who didn't get burned to death on November 5th, but also because it showcases the full range of Hardingham's voice.

"Colne River Chorus" is a beautifully delivered folk song in which carefully placed chorus harmonies provide its stand out moments. "Cheshire Man" ran "Jesuit Barrels" close as my highlight song, possibly because I connect through my professional life with songs that involve any reference to international trading. It is the album's shortest song but carries real punch.

For me, one of the things that helps "Dusk" stand out as an album is its live feel. Having caught one of Hardingham's live radio performances recently, it is easy when listening to these songs to imagine being in a venue listening to exactly the same quality of delivery, and "Berries" is probably the best example of that. "Magpies" begins with some lovely guitar work and quickly delivers lyrical gems such as "shining inside is a chance for something new / so I'll reach out my hand and take it from you". It's a song with plenty of space, emphasised by a subtle piano foundation, and seemingly giving extra substance to this incredibly strong lyrical performance.

With an earliest known date around 1889, "Twankidillo" is a traditional song for celebrating the work of the blacksmith "the best of all fellows". "Floorboards" opens with another simple but gorgeous guitar intro, and quality instrumentation throughout supports heartfelt lyrical deliveries such as "the holes in my back tell a story / the cracks in my armour today". The album finishes with an excellent version of Jules Gibb's "Nana Was a Suffragette".

And also remember this. "Dusk" is Lizzy Hardingham's debut album. There are very few folk artists who truly seem to tell the stories of songs through the projection of their voice, who seem to hook you into the story by the way that they sing. Lizzy Hardingham has that ability, owning every song whether self-penned, traditional songs or covers of the work of others. Savour each song because individually these songs are top drawer. Expect to hear a lot more of her.