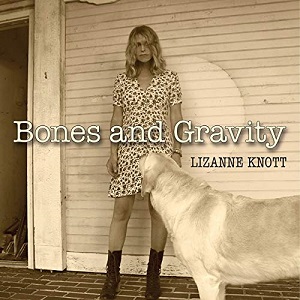 
Having revisited past recordings with twin 2018 compilations, Anthology and Sunset Avenue Sessions, the Pennsylvanian singer-songwriter began sorting through her collection of half-written lyrics and part-formed melodies with a view to a, album of new material, one which would be personal and examine the circumstances we can find ourselves in, without placing blame on someone or something else.

First up comes a brace of break-up numbers, 'Walk Away', a song she describes as having Springsteen vibe, about getting to the point when you realise a relationship isn't working and that you don't want to spend the rest of your life, alone, waiting and "staring at the same four walls". However, having made the move, whoever's fault it may be things came off track, it can be even worse to find yourself with no one to turn to, a sense of being adrift ("there's a hole in my heart and I don't think I can survive/ I need somebody to hold me and keep me alive") that informs the slow waltzing 'Keep Me Alive.

Featuring Michael Ronstadt on cello, the gypsy blues-tinged title track continues on a theme of love and loss ("I don't remember what day it was/I only know something happened to us/When the clouds rolled in, the sky turned gray" and the 'broken things' that come back to haunt at night.

The determination not to apportion blame comes with the strummed 'Caroline', Tom Hampton on mandolin, with the realisation that sometimes it's not personal, just part of another's nature ("People like you are always on the take/Leave everything broken in your wake/Somebody must've done something to you sometime") and that maybe the situation warrants compassion not blame as she sings "You're so unkind; I hope you find some peace of mind".

On the other hand, revenge can be satisfying too, thus, inspired by one of her own bad relationships, 'Lay Him Down', a rootsy fiddle-driven handclap stomp about ridding yourself an abusive drunken partner ("The sunrise never gonna come around/Till he's six feet under in the stony ground") that features Dan May on backing vocals and some punchy lap steel from Hampton.

As might be assumed, the slow and dusty 'Emmylou' was inspired by Ms. Harris, although the song's not about her but rather drawing on the ache she can bring to her music, the song itself about finding herself in an internal war torn between trying to live two lives, one with her friends in Nashville and one with her family in Pennsylvania and seeking to find redemption.

Ross Bellenoit on baritone guitar, 'Hurricane' is a great jog-along twangy country rhythm track that she declares, partly playfully, to be as close to autobiography as it gets as she sings "Well, I'm not a good friend, I make a treacherous wife/I will ease you down on the edge of a knife/I'll make you smile, just to see you cry/And I'll make you promise, just to watch you lie", declaring "I'm a Texas flood/I'm a burning house/I'm a hurricane in a wedding gown".

Accompanied by just producer Glenn Barratt on baritone, piano and Wurlitzer, 'Tired' is an intimate reflective strum about the moment when you realise your relationship has lost the spark and become just everyday monotony and "Sometimes it gets too hard/To argue what is right/So you just give up the fight". Equally sparse, Chico Huff on acoustic bass, the whisperingly sung slow shuffling 'Kindness was written, she says, for someone who briefly came into her life and who later came under attack by another artist and was vilified in the media circus, causing her to question things as "I had only seen beauty and kindness in him." Basically, it's about how, in a world where negativity can so easily take hold, a little kindness doesn't cost a thing.

Knott may declare herself a 'treacherous wife', but she's a definite animal lover and the playful country shuffle 'Like I Love My Dog' was written for her Labrador, Jake (as seen on the album cover), largely improvised in the studio with Belleboit providing a shiny guitar solo,where she warns "I don't love you like I love my dog" because "People leave you and let you down/But my dog will always stay".

It ends with another animal image, 'I Was A Bird', again featuring just her and Barratt, a gentle, almost lullabying number about having to leave, flying whichever way the wind blows, hurting yourself and others in the process, but finally coming back to home, in whatever form that takes.

In many ways an album about making peace with herself, the liner notes contains this quote from Sylvia Plath, "perhaps some day I'll crawl back home, beaten, defeated. But not as long as I can make stories out of heartbreak, beauty out of sorrow." Knott is a musical alchemist.

Be Careful With My Heart