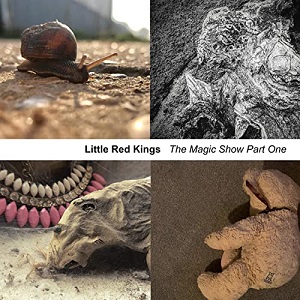 
In this era of being able to find ANY kind of music online, the concept of whether or not something is "out of date" is itself out of date. Rather each musical epoch is treated as a kick-off point for a specific sub-genre of popular music.

Take 1970s Springsteen with an admixture of Queen and sprinkles of Zeppelin and AC/DC, then add a phenomenally-tight powerpop production and engineering job to the music, and you'll have Little Red Kings. The songs are designed to get you moving, and even my old toes were tapping. Strongly rhythmic goes without saying, but there are strong tunes here too - the opener Harry's Town couldn't have been better picked from that point of view: driving but melodic.

They have their more laid-back side too. Weather the Storm displays a delicate balance of dynamics in both performance and arrangement that the earlier tracks don't even hint at. The vocal, although strongly soulful, is never overdone.

There's some real lyrical originality too - Peppermint, for example, opens with

"My mind is like a peppermint,
fresher than a fingerprint
at a crime scene"

The more I listen to the album, the more I get a sense of masterful performers brilliantly recycling the crystal essence of a musical yesteryear for modern listeners. I haven't heard anyone else carry out that difficult task so well since 10cc.

Not only is this a brilliant album of its kind (and is, with luck, well capable of launching the band onto the international market), but I suspect these guys are really something live. Highly recommended.