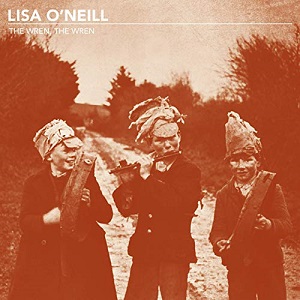 
Towards the end of 2018, Lisa released one of the most invigorating folk albums of that year, I Heard A Long Gone Song, which I only discovered belatedly and quite by chance but I found it so compelling that it was with great alacrity that I reviewed it here at the start of 2019. At long last, we have a followup - although it's a frustratingly brief one, a mere three-tracker lasting barely ten minutes in total. Even so, the stunning quality of the music - and indeed, of the whole package, which commendably even sports a full lyric sheet - puts that of many a full-length release to shame.

Here Lisa delivers a terse collection that, in essence, explores the connection binding the ancient with the present: in memory and reality, fact and folklore, tradition and practice, and probably also innocence and experience. The first and last tracks give an Irish take on the very old (possibly pagan) tradition of hunting the wren on St. Stephen's Day - the pan-European ritual celebration of midwinter. The EP opens with Lisa's own song, John-Joe Reilly, which she describes as "a new spin on an old complaint", this being the "false true lover" folksong trope. Here she assumes the perspective of an innocent young girl who, during the wren hunt, is lured into the woods by the song of a wren boy and becomes trapped and betrayed. In Lisa's own words, "the line between playfulness and abandonment is fine and sadly, the outcome is often fatal". The song undoubtedly provides a clever commentary on a common flaw in human behaviour, but what's most impressive is the raw communicative power of Lisa's voice in this portrayal, accompanied in simple, almost humble (and astoundingly expressive) fashion by her own banjo plus fiddle (Jesse Smith) and sparing piano chords (Romy). The final repeat of the chorus brings a suitably abrupt end to the tale and forces us to reflect.

The final (title) track on the CD-EP is Lisa's rugged rendition of the old children's song that gives an account of the wren hunt itself: done to a rustic harmonium drone, the infectiously animated voice rhythm dancing on Seosamh Ó Neachtain's nimble stepping feet and joined by Jesse's urgent fiddle for an almost jubilant coda.

Sandwiched in between the two wren-related items (but only available on the CD incarnation of the EP) is Lisa's plaintive and authentic rendition of "a little bit of heaven in County Cavan", the nostalgic song Come Back Paddy Reilly To Ballyjamesduff, written in the late-19th-century by the Roscommon-born poet and songwriter Percy French (who is remembered, among other things, for The Mountains Of Mourne, Are Ye Right There, Michael? and Abdulla Bulbul Ameer, and interestingly, was by vocation an inspector of drains!). Lisa's rough-hewn voice and banjo are further accompanied by some delicious double-stopped fiddle from Jesse. A most captivating number.

Lisa's imperious voice rightly dominates this release, and she's audibly carrying on the latter-day tradition that stretches from Margaret Barry through to Lankum's Radie Peat. It's absolutely riveting. I tell ye, I've been unable to wrench this EP off of repeat play - it's that mesmerising.