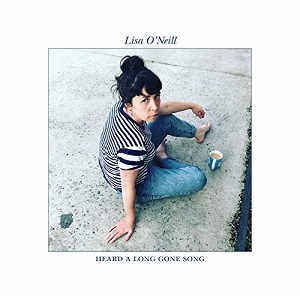 
Here's another one that slipped through the net during 2018. For reasons unfathomable, no-one had seen fit to tip me off about Lisa, and I wasn't even sent a copy of this album when it came out; indeed, I must've been one of the last folks on the planet to've been alerted to her name. But this is a stunning record, no mistake, and on the evidence of this remarkable 44-minute disc alone Lisa would've made my year's best-of list without question. And yet Heard A Long Gone Song is, I understand, Lisa's fourth album, following on from the apparently less traditionally-inclined releases Has An Album (2009), Same Cloth Or Not (2013) and Pothole In The Sky (2016), all of which I nonetheless now can't wait to investigate.

Lisa's a tremendous singer with a raw and uncompromising timbre, a voice that's upfront and strident, but intensely commanding and absolutely compelling. And completely honest, albeit not entirely comfortable listening, especially at first. Which inevitably means a taste to be acquired (and it may well not be one everyone can acquire) - but it sure captivated me right from the outset. Lisa's delivery is abrasive, to be sure - but in a positive, cleansing way. And totally riveting.

Lisa grew up in Ballyhaise, Co. Cavan but is now Dublin-based. Now here's a thing - I felt on initial acquaintance that Lisa's voice has a definite kinship with that of Radie Peat (of Lankum), not least in its visceral in-yer-face immediacy, and this assessment was heartily endorsed when I discovered the two singing together on a blindingly intense a cappella rendition of The Factory Girl just over halfway through the disc. What a bond between them - this is real hairs-prickling-on-the-back-of-the-neck stuff for sure, a reading of primordial power that conjures, like the album's title itself (a phrase taken from the lyric of Shane McGowan's Lullaby Of London, the masterly album closer), nothing less than the voice of antiquity itself.

Lisa's singing pierces directly into the listener's consciousness, the embodiment of the tales she's telling. Aside from the great traveller singers like Margaret Barry and Kitty Cassidy, whose very spirit she appears to be harnessing, the closest comparison I might otherwise venture (as regards contemporary singers) is that of North Yorkshire singer Anna Shannon, or perhaps on the other hand the fluent sean-nós styling of Denny Bartley. But in the end Lisa's own vocal personality is distinctive and all-embracing, utterly extraordinary and yes, unquestionably riveting. For the album's opening gambit, her unadorned voice strides boldly onto the sound-stage with a truly no-holds-barred rendition of The Galway Shawl that's a far cry from the easy-going drawling chorus-song beloved of countless sessions, instead bringing back into the frame all the true drama of this street ballad. Hard though this act is to follow, Lisa manages to do just that with a scorching rendition of Along The North Strand (a variant of the Lady Isabel & The Elf Knight murder ballad) bedecked with the scariest of accompaniments from Christophe Capewell (fiddle), Cormac Begley (concertina) and Libby McCrohan (bouzouki), which at the coda unpredictably disintegrates into a fragment of a jig. But during the ballad itself, the grinding, swooning backdrop creates a truly spectral, eerie sound, one that's both underpinned and embellished by Lisa's own deft baritone guitar. That instrument later provides a subtle backbone to one other track - Lisa's own song telling the story of Violet Gibson, an Irish woman who travelled to Rome in 1926 with the idea of assassinating Mussolini. Lisa accompanies herself on tenor banjo on three of the album's songs, including The Lass Of Aughrim (a version of the traditional Lass Of Rock Royal) and her own deeply poignant original composition Rock The Machine which deals with the personal impact of mechanisation on the former workers of the Dublin docklands. Another of the album's standout tracks is A Year Shy Of Three, where Lisa's singing of her own poem inspired by Frederick William Burton's painting The Aran Fisherman's Drowned Child is mirrored by Cormac's bass concertina playing the air of The May Morning Dew (now there's another reminiscence of Sherburn-Bartley…).

Lisa's album has given me one of my most memorable musical experiences of 2018 - what a pity it was only during the year's closing months that I was able to discover her spectacular talent. Take my word for it - it's stupendous.