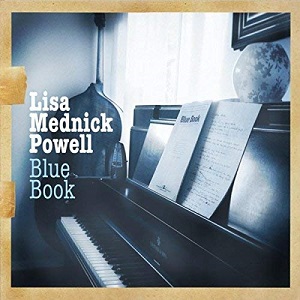 
Based just outside Joshua Tree, Mednick-Powell last released an album, her second, back in 2002, since when life and a Master's degree got in the way of making music. Thankfully, the path has come round again, joined by bassist husband Kip Powell and an assorted of notable names making their contributions. One such is singer Victoria Williams lending her vocals to opening track 'Smoke Over Carolina', the third in her civil war trilogy, here between the bosses and workers that draws on a chicken processing factory fire in which the workers were trapped inside, Greg Leisz's Weissenborn accentuating the track's echoes of The Band.

'Pieces Of Your Soul' is one of three numbers to feature harmonies and guitars from Tommy Malone, offering the wisdom that "Some things we carry/some things we must let go." The second is the more uptempo jog of the nostalgia and regret-fuelled 'Cold Coffee' where they're also joined on vocals by Alison Young, Mednick-Powell providing the accordion parts, the third being album closer the southern country soul of 'Highway Prayer', a previously unreleased moving on number originally demoed by her and Powell back in 1985.

Williams also resurfaces on 'I Am Not Gold', Danny Frankel behind the drums and Gar Robertson on pedal steel and mandolin for a slow march beat feminist number about rising above male mythologising ("there are days you might mistake me/for a precious jewel buried in a stone/but you'd best look beyond your longing/go find a girl who's flesh and bone"). Young also features on a second track, 'To The Wilderness', a number about lasting friendship "if misfortune should befall you and ….none of your loved ones call you/in your time of need/I will come to follow you/and wish you godspeed" that reminds somewhat of Creedence's 'Have You Ever Seen The Rain'.

A song about emotional warfare and the scars it leaves, the soulful slow sway title track itself has her joined on harmonies by Sophie Kastner and Chris Unck, while Gabriella Evaro features on the spare desert noir of 'Checkpoint', Mark Soden on trumpet and Leisz on lap steel for a song she describes as "a cry against trump and all he stands for."

This leaves two numbers, both standouts in their own way Co-written with Powell, and a personal favourite, 'Give the Guns to the Girls' is an anthemic feminist song written in response to the Boko Haram abductions and the Stanford rapist, Brock Turner that, structured as a suite and opening with the striking of a match, strides on a walking a march beat as she sings "Give the guns to the girls/quit talking to me about peace in this world/let the girls have the guns/let them hunt down the hunter till he has nowhere to run." Robertson's angry guitar fades away as goat bells and piano trill signal the soaring play out "angel of death angel give back her breath/come down come down come down come down" refrain and a final burst of bells, ambient clatter and piano that serves to set the musical mood for the following five-minute 'Crow', the album's sonic experimental number, a day of reckoning lyric couched in discordant prepared piano with double-tracked vocals and ambient sounds that include the family dogs.

A stunning return to the stage, this well deserves a place in your library.