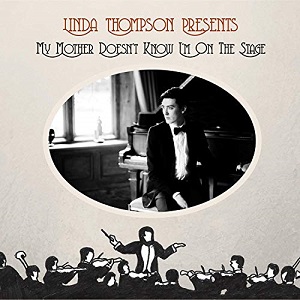 
Here’s a curiosity: Linda Thompson celebrates the music of the English music hall. You could be forgiven for initially thinking this is not the same Linda Thompson you remember from her daring folk-rock adventures with Richard Thompson, Sandy Denny, The Bunch and Home Service. But read on…

It was believed that Linda’s singing career would be abruptly terminated when she succumbed to dysphonia in the mid-’80s; this lasted well over a decade until just after the millennium, when she emerged triumphantly having found a will and a way to continue singing – going on to release four solo albums and to make contributions, albeit on a limited basis, to a number of other projects. One of these was a one-off evening of music-hall songs staged at the Lyric Theatre, Hammersmith in May 2005. I guess not so many people know that Linda has always had a penchant for the music-hall and variety, and those experiences were a big part of her early life; her father took her to theatre shows featuring greats such as the Crazy Gang, and she eagerly memorised the works of Max Miller and songs from even earlier music hall acts.

This CD presents performances mostly recorded at the above-mentioned Hammersmith concert, featuring Linda herself with a stellar array of special guests. It must first be noted, however, that despite her strong connection with the music of the music-hall Linda only appears on three of the disc’s concert-sourced tracks. These comprise just two solo songs (I Might Learn To Love Him Later On and Good-bye Dolly Gray) – both brilliantly characterised, I might add – and a mere chorus role joining in with the brief ensemble finale Show Me The Way To Go Home. Of the remaining songs, Martha Wainwright turns in a genuine, heartfelt and simple piano-backed rendition of Stephen Foster’s Beautiful Dreamer, Bob Davenport an authentic I Wish You Were Here Again (accompanied by Roger Digby on concertina), and Linda’s son Teddy Thompson three contrasting numbers (showstoppers Burlington Bertie From Bow and Brother Can You Spare A Dime?, and the arguably less well-known Here Am I Broken Hearted, the latter an especially affecting portrayal).

The fully idiomatic performances all strike exactly the right note, and although personally I couldn’t warm to cabaret artist Justin Vivian Bond’s contribution A Good Man Is Hard To Find, music director Michael Haslam’s piano accompaniment is spot-on here, as throughout. Of the other artists making cameo appearances, Cara Dillon & Sam Lakeman shine with their tender account of Lark In The Clear Air. Separately recorded from the concert and slotted in aptly to the CD’s sequence we find music-hall legend John Foreman doing his “turn” on If It Wasn’t For The ’Ouses In Between (with Linda a delicious foil on harmony vocal) and actor Colin Firth delivering the CD’s title piece (a Billy Bennett monologue). The knockabout rendition of Wotcher! (Knocked ’Em In The Old Kent Road), by latter-day music-hall veteran Roy Hudd with Jools Holland tinkling the ivories of the old Joanna, is taken from a BBC documentary. And last but not least there’s London Heart, which, it turns out, is an affectionately true-blue original composition by The Rails’ James Walbourne (Linda’s son-in-law) that was recorded direct to James’s iPhone (yes, really!) – and it fits into the whole sequence like the proverbial glove, guv!