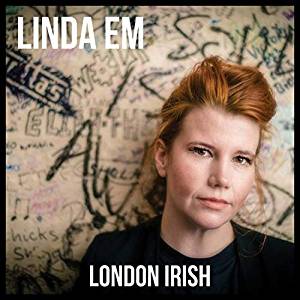 
Linda Em is an Irish born singer-songwriter originally from Waterford, Ireland. Her family moved to London's East End in the 1980's and when still in her early twenties, Linda started singing blues and rock 'n' roll in local pubs and clubs. She subsequently met musician Chris Wyatt with whom she wrote and recorded her first record 'Shadow Lands' in 2015.

Since then, we are told, Linda's sound has adopted strong elements of Americana, Folk Noir, a Celtic undercurrent and occasional splashes of gospel and soul. This has culminated in the 4 track EP 'London Irish' which is the first step in a different direction for Linda towards a more atmospheric, spacious sound and vocal performance.

Opener 'Wild Fire' is led in on stately strummed guitar and piano stabs before Linda's crystal clear vocal, which tonally occupies the space somewhere between the Americana-Country of Roseanne Cash and edgy, contemporary American singer-songwriter LP. The track slowly builds, stretches out and features an evocative, additional vocal part from producer Gavin Glass.

'Two Hands' is a more austere, piano and vocal torch song that again conjures up lots of musical imagery, this time shades of Leonard Cohen and Marlene Dietrich, then 'Little Lightmaker' thumps in with its strident rhythm part, strong melody and modern bar room country vibe.

Closing song 'White Horse' is a slow, sparse but still strongly rhythmic piece that puts Linda's voice to the fore as the song layers up in effective fashion.

This is an elegant little piece of music. Beautifully recorded, produced and presented it all adds up to a fine introduction to the work of Linda Em.