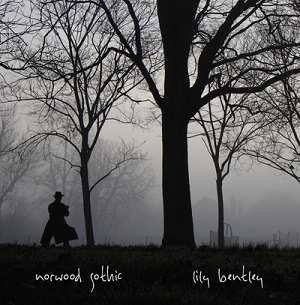 
Lily’s a folk singer and songwriter born, raised and still living in south-east London (Crystal Palace – hence the title of this album, strategically sited a stone’s throw from there). Her natural performing idiom is a cappella, which is not surprising since her early singing experiences were in choirs. Lily’s voice is pure and clear yet with ample body, and her diction is precise and impeccable. Moreover, she’s blessed with a fine sense of melodic line and keen appraisal of the expressive potential of her chosen texts.

Having learned of Lily’s special attributes as a singer, then, you might be somewhat surprised to discover that Lily’s debut album contains only two tracks that are performed a cappella. This may from the outset have been a conscious decision, I don’t know, but the reported story is that a chance meeting with acclaimed producer Gerry Diver (through a fRoots magazine fundraiser) led to the recording of a single (Down In Yon Forest – which by coincidence is one of the above-mentioned a cappella renditions) and thereupon to him producing her fully-fledged, ambitiously more-fully-clothed full-length debut album. Gerry is thoroughly in sympathy with Lily’s vision, and plays every instrument you hear (and there are many!) as well as being responsible for working his production magic (you may recall him taking on a similar role for Lisa Knapp a short while back). The first-time listener may initially feel there’s a little too much detail in the mix at times, but it works best if you step back and take Gerry’s imaginative embellishments on their own terms rather than worrying about Lily’s musical personality being submerged (which it ain’t – instead it’s enhanced, and often more subtly than you might imagine considering the delicious tonal weight and gentle richness of Gerry’s brilliant settings).

Lily’s choice of songs for Norwood Gothic leans marginally more toward the traditional (particularly Irish) – although having said that, the disc also includes four of her own compositions, which, while not conforming to the inward-gazing s/s trope, aren’t exclusively traditionally-inspired either. These tracks turn out to be disc highlights, in fact. Brookmill Park resonates with a limpid genius loci, while on the swirling Celtic-legend of Danilo & The Swan-Maiden Lily’s attractive lower-register delivery bears a similarity to that of Carole Pegg. The disc’s opener, the mesmerising Small Gold Ring, is set to a rippling arpeggio conveying the rhythm of a boat in motion on the waves, whereas Black Country (Death Is Not The End) is driven along Seth-Lakeman-style by a thrusting, stomping violin figure.

As far as the traditional songs are concerned, Lily’s choices on this occasion are mostly pretty much standard fare, although they (and she) certainly benefit from Gerry’s aptly atmospheric production and some felicitous touches in the accompanying instrumentation. She Moved Through The Fair, for instance, is set to a mesmeric drone, out of which Lily’s voice arrives as from the mists of time; on The Parting Glass, unhurried eastern-inflected banjo meanderings provide a desolate counterpoint to the melody, while The Lagan Love becomes a delicate, twinkling folk-baroque-styled lament.

The downside is that occasionally Lily’s interpretations, although displaying plenty of evidence of forethought, don’t quite attain the level of personal insight that would give them an edge in such a competitive field – let alone the spooked innovation that would place them truly in the house of Gothic Folk. Another issue is that taken together the six traditional tracks feel mildly inconsistent in approach and delivery, and two in particular turn out peculiarly idiosyncratic (as opposed to individual in ownership terms, I mean). Perhaps it’s just that not all of the song choices quite suit Lily; but to be fair, any developing artist can be forgiven for getting it a little wrong in terms of interpretive decisions on occasion, after all…

On the attractively lilting Fear A Bhata (sic), Lily’s take on an authentic Gaelic pronunciation, while undoubtedly brave and carefully executed, just doesn’t convince. Then in contrast, the a cappella Ploughboys In The Gloaming is done in a particularly measured, deliberate manner, where each syllable and phrase is weighted oh so deliberately in a distinctly cultivated fashion so that it comes across almost as a refined, slightly precious parlour-song sung by a rather cultured lady! It’s beautifully sung in terms of precise technique, but the feel ain’t quite right. However, Lily adopts a similarly steady, unhurried, pace of delivery for Down In The Forest, which proves much more successful in terms of its directly involving, captivating (and more convincingly “gothic”) aura.

Overall, then, Lily has given us a most persuasive debut album, such that I’m keen to hear more of her – preferably on some less well-trodden material as well as more of her own compositions.

Down In Yon Forest