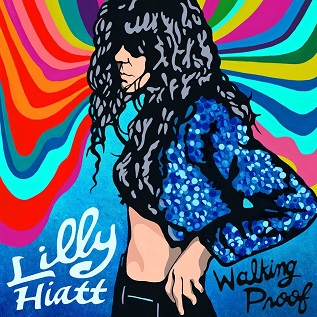 
The promo image for Lilly Hiatt's new album Walking Proof shows her in ecstatic pose - jumping, smiling, hair tossed wildly, all the while toting her Rickenbacker.

It's a joyful picture and once you delve into this, her fourth release, you instantly know why Nashville-based Lilly is looking so happy - she has come up with a free-ranging, exuberant, engaging album tinged with chunky country/rock and gentle pop, covering topics that give her songs a sharp poise, sense of fun and no shortage of elegance and bite.

Walking Proof, which Lilly has clearly described as emerging from the "essential work of re-examining her relationships with herself and the world around her," is an 11-track winner whittled down from the diligently-crafted 25 songs she brought to the studio in the first instance.

Over all there is a calm exuberance to be found in the music, emanating from the "different voices" she has had in her head since touring Trinity Lane, her previous record.

Opening track, Rae, with its beautiful and magnetic melody, serves as a pointer to the quality vocals we can absorb on the following ten tracks. They are high in the mix and never fall secondary to the music.

The stirring P-Town follows in solid country rock fashion and you can just imagine it pounding the rafters at a live venue and yes, the now forlorn Basement East in Music City does spring to mind. It has the knock-out line, too: "Don't you hate it when people say 'it is what it is.'" Mafia men will doubtless not be changing the way they communicate, but no matter.

Some Kind Of Drug is brilliant with spikey, insistent guitar and Lilly's voice skimming across what is laid down by the band (including her Dad, John Hiatt, unobtrusively, on this one) - and I can't shake off The Cure-mood here, which is no bad thing.

This vies for my standout song nomination (alongside the title track) with Never Play Guitar, which is so damn catchy it is criminal. Everything slots into place in a 3 minute 20 second song about pesky neighbours - or, maybe she's the bothersome one -before jumping into her car to head for "a little place by the mountains / a little place by the sea / I don't give a damn if it's just my guitar and me."

Nothing is hurried on this record, thankfully, so we can immerse in Lilly relishing every minute at the mic. Candy Lunch is a serving of wistful pop and then on the perkiness of Move she puts a toe ever so slightly into Springsteen's "I'm On Fire" territory. Lush and refined is Drawl, which slips out in a glorious and heartfelt flow, dipped in a sheen of dreamy Americana that Kathleen Edwards creates as well.

The title track is a jaunty gem in toe-tapping, Steve Earle Galway Girl mode: there is an understated backing, persistent snap of a drum beat, hints of violin and mandolin with Lilly's voice utterly beguiling. "I could tell you that it's easy / but that wouldn't be the truth / If you ever need to call me / well you know there's walking proof."

Amanda Shires and Aaron Lee Tasjan are among buddies also featuring on the release but there is no doubt that Lilly Hiatt is the star of her own show here on what is a compelling and irresistible listen.

Some Kind Of Drug