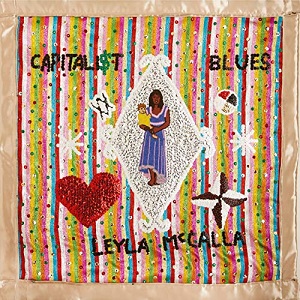 
New-York-born Leyla of the African-American string band Carolina Chocolate Drops has lived in New Orleans since 2010, and her second solo album A Day For The Hunter, A Day For The Prey (2016) examined and broadened not only her Creole identities but also her sound. Her growing relationship with the New Orleans music community is even more strongly evidenced on album number three, The Capitalist Blues, on which she employs a full band consisting variously of piano, trumpet, clarinet, trombone, tuba, electric and lap steel guitars, viola, and assorted percussion including trap set; this band just happens to be Jimmy Horn's acclaimed R&B ensemble King James & The Special Men, so you just know a treat's in store.

The vital spirit of New Orleans jazz, the strutting marching band, is alive and very much kicking here especially on the opening, title cut, but many other shades of roots music find expression too on this set of original compositions that share a common theme: that of Leyla's personal response to the current political environment, where many of the issues are financial but at the same time rarely simply financial. The musical idiom shifts from Creole jazz through to jumpin' zydeco (Oh My Love), with diversions into classic-sounding, organ-drenched slow-drag soul (Heavy As Lead), brooding discordant swamp-rock (Aleppo), cheesy swaggering barrelhouse (Me And My Baby) and high-energy Haitian rara carnival music (Settle Down). The individual settings impact even more greatly through their impeccable matching with the flavour of each song's individual commentary - for instance, the blistering distorted electric guitar on Aleppo creating almost an aural image of the war in Syria that Leyla had been watching unfold on a Facebook video at the time. Departing momentarily from the political issues, Ain't No Use (which features Leyla's husband Daniel Tremblay on 12-string) is a keen slice of personal optimism, of not losing oneself in the face of everything.

The album also includes a couple of songs sung in Haitian Creole, which Leyla thinks of as a "language of resistance", as she further explores the connection between New Orleans and her ancestral Haiti. It's a really potent mix, and though in essence quite different from Leyla's previous two, more folk-inflected albums with an altogether more strikingly edgy sound (and a noticeable absence of the cello, hitherto Leyla's signature instrument - instead Leyla restricts herself to the tenor banjo here).

No argument, Leyla's making some important statements here, not least on issues of political ineptness, inequality and social justice, set to powerhouse music. All very persuasive and musically satisfying, and with an excellent recording to boot.