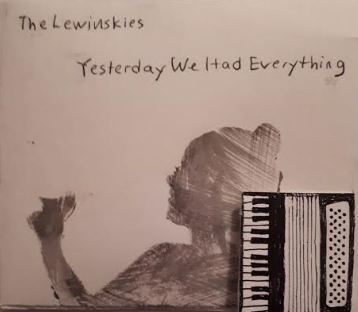 The Lewinskies
Album: Yesterday We Had Everything
Label: Self Released
Tracks: 10
Website: http://www.thelewinskies.com


Having reviewed John Reed's recent album on which the Canadian husband and wife duo, Kristen and Matt Lewis, appeared, he kindly sent me a copy of their own album, one which, recorded live in a single session of under four hours and nestling in its handcrafted sleeve, well deserves wider exposure.

Kristen taking the pure-voiced, tremulously emotive lead vocals throughout, it opens with the quite lovely slow waltz, accordion wheezing epiphany-themed 'In Time', a hint of Cohen influences sprinkled in the musical ether, moving on to the equally slow-paced and comfortingly melancholic 'Where Are You?' the accordion-led melody mingling Jewish klezmer roots and a late night French café ambience.

The two numbers pretty much set the tenor and musical template for the rest of the album, but, while it follows a fairly narrowly-defined path, as evinced by the simple, almost hymnal 'Birds Fly', the landscape is beguiling rather than boring. Rumbling percussion sounds here and there, such as on the suitably chilly, clarinet-coloured 'Icy So Long' (a wintry mood also clinging to 'Stay On'), the doomy waltztime 'Yesterday's Coffee', where Kristen recalls Judy Henske, and the emotional turbulence of 'Collide'.

Reed provides the spoken eco-themed narration about plastic in the ocean on the powerfully sung, bluesy 'Rip It Away' with its pointed lyrics about saying everything will be okay in the morning, the environmentalist concerns also at the heart of the final song, 'The Deep', a slow almost funereal march bass drum rhythm underpinning lines about fish being washed up, sacrificial soldiers from the sea, "witness to pollution's fools" as the vocals gather to a wailing climax.

2018 is nearly over, but it's not too late to make the Lewinskies one of your discoveries of the year.