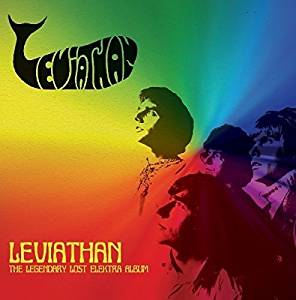 
Another of British psych-prog's legendary "missing link" aborted projects finally sees the light of day on a legitimate CD release. Leviathan was a four-piece outfit that grew out of Brighton's Mike Stuart Span, one of the era's many unsuccessful soul-turned-psych acts. Comprising Stuart Hobday, Brian Bennett, Roger McCabe and Roscoe Murphy, the band's primary stock-in-trade was tough, febrile guitar-led bluesy psych. After steadily building a good live reputation and recording a session for John Peel's radio show, the band's signing to the prestigious US label Elektra (as only its third British act) should have been its ticket to greater acclaim.

However, their debut on record was an unusual and curious marketing decision - a simultaneously-released double-single package dubbed The Four Faces Of Leviathan, which showcased the band's versatility so much more widely than one sole bid for the charts could have done but instead shot itself in the foot by confusing matters and dividing potential sales. The four tracks were all very strong, though, and formed a spectacularly diverse basis for a projected album release. The driving, commercial Remember The Times and the plaintive, pensive ballad Time were complemented by the cryptic, phasing-drenched Second Production and the distinctly-zeitgeist scenario of The War Machine. The A-side of a third single, Flames, was also selected for the album, but in a shorter, mellower, less thrusting manifestation than on its bid for chart acceptance. To make up the remainder of an album's worth of material, the band drew mostly on re-workings of songs from late-Span days including Through The Looking Glass (premièred at the radio session), and finished up with a smouldering cover of Evil Woman, a brooding blueser that was already doing the rounds with (among others) Canned Heat and the Troggs.

Then came the biggest mystery of all - label boss Jac Holzman pulled the plug, and the album was withdrawn at the last minute. This CD reissue suggests that it surely can't have been an issue of quality - for although there's a more than hint of not-quite-realised musical vision within the nine tracks when taken together, there's a healthy consistency in the musicianship (with Bennett's searing guitar work especially outstanding) and a strong presence as a cohesive unit. Certainly as a "bookable" album band Leviathan were at that point, on the strength of this set already streets ahead of much of the competition that was being readily afforded record deals for weaker product.

This abundantly welcome release from Cherry Red's psych imprint Grapefruit marks the album's CD debut (it hitherto received only a very limited vinyl-only pressing in 2012). It's definitive; having been sourced from the original Elektra master tapes, it boasts excellent sound, and the package includes a 16-page booklet containing a great background essay and rare photos and memorabilia. The disc's three bonus cuts comprise the non-album B-side of the Flames single, the revamped single cut of its A-side, and an Australia-only version of Remember The Times where the brilliant lead guitar was cruelly and inexplicably edited out of the mix!

Cherry Red have done us a big service by negotiating the long-awaited CD release of this album, one that, as you'll hear, genuinely deserves that "legendary" tag.